The planet formation environment around M dwarf stars is different than around G dwarf stars. The longer hot protostellar phase, activity levels and lower protoplanetary disk mass of M dwarfs all may leave imprints on the composition distribution of planets. We use hierarchical Bayesian modeling conditioned on the sample of transiting planets with radial velocity mass measurements to explore small planet mass-radius distributions that depend on host star mass. We find that the current mass-radius data set is consistent with no host star mass dependence. These models are then applied to the Kepler planet radius distribution to calculate the mass distribution of close-orbiting planets and how it varies with host star mass. We find that the average heavy element mass per star at short orbits is higher for M dwarfs compared to FGK dwarfs, in agreement with previous studies. This work will facilitate comparisons between microlensing planet surveys and Kepler, and will provide an analysis framework that can readily be updated as more M dwarf planets are discovered by ongoing and future surveys such as K2 and the Transiting Exoplanet Survey Satellite. 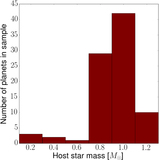