High precision proper motion (PM) measurements are available for approximately 20% of all known dwarf satellite galaxies of the Milky Way (MW). Here we extend the Bayesian framework of Patel et al. to include all MW satellites with measured 6D phase-space information and apply it with the Illustris-Dark simulation to constrain the MW’s mass. Using the properties of each MW satellite individually, we find that the scatter among mass estimates is reduced when the magnitude of specific orbital angular momentum (j) is adopted, rather than their combined instantaneous positions and velocities. We also find that high j satellites (i.e., Leo II) constrain the upper limits for the MW’s mass and low j satellites, rather than the highest speed satellites (i.e., Leo I and Large Magellanic Cloud), set the lower mass limits. When j of all classical satellites is used to simultaneously estimate the MW’s mass, we conclude the halo mass is 0.85+0.23 -0.26 × 1012 {M}⊙ (including Sagittarius dSph) and 0.96+0.29 -0.28 × 1012 {M}⊙ (excluding Sagittarius dSph), cautioning that low j satellites on decaying orbits like Sagittarius dSph may bias the distribution. These estimates markedly reduce the current factor of two spread in the mass range of the MW. We also find a well-defined relationship between host halo mass and satellite j distribution, which yields the prediction that upcoming PMs for ultra-faint dwarfs should reveal j within 5 × 103-104 kpc km s-1. This is a promising method to significantly constrain the cosmologically expected mass range for the MW and eventually M31 as more satellite PMs become available. 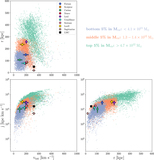