Discovery of a Transiting Adolescent Sub-Neptune Exoplanet with K2

The role of stellar age in the measured properties and occurrence rates of exoplanets is not well understood. This is in part due to a paucity of known young planets and the uncertainties in age-dating for most exoplanet host stars. Exoplanets with well-constrained ages, particularly those which are young, are useful as benchmarks for studies aiming to constrain the evolutionary timescales relevant for planets. Such timescales may concern orbital migration, gravitational contraction, or atmospheric photoevaporation, among other mechanisms. Here we report the discovery of an adolescent transiting sub-Neptune from K2 photometry of the low-mass star EPIC 247267267. From multiple age indicators, we estimate the age of the star to be 120 Myr, with a 68% confidence interval of 100-760 Myr. The size of EPIC 247267267 b (R P = 2.8 ± 0.1 R ⊕) combined with its youth make it an intriguing case study for photoevaporation models, which predict enhanced atmospheric mass loss during early evolutionary stages. 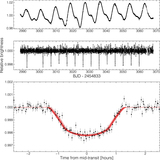