We present the analysis of the planetary microlensing event MOA-2011-BLG-291, which has a mass ratio of q = (3.8 ± 0.7) × 10-4 and a source star that is redder (or brighter) than the bulge main sequence. This event is located at a low Galactic latitude in the survey area that is currently planned for NASA’s Wide Field Infrared Survey Telescope (WFIRST) exoplanet microlensing survey. This unusual color for a microlensed source star implies that we cannot assume that the source star is in the Galactic bulge. The favored interpretation is that the source star is a lower main-sequence star at a distance of D S = 4.9 ± 1.3 kpc in the Galactic disk. However, the source could also be a turn-off star on the far side of the bulge or a subgiant in the far side of the Galactic disk if it experiences significantly more reddening than the bulge red clump stars. However, these possibilities have only a small effect on our mass estimates for the host star and planet. We find host star and planet masses of {M}host}={0.15}-0.10+0.27 {M}⊙ and {m}p={18}-12+34 {M}\oplus from a Bayesian analysis with a standard Galactic model, under the assumption that the planet hosting probability does not depend on the host mass or distance. However, if we attempt to measure the host and planet masses with host star brightness measurements from high angular resolution follow-up imaging, the implied masses will be sensitive to the host star distance. The WFIRST exoplanet microlensing survey is expected to use this method to determine the masses for many of the planetary systems that it discovers, so this issue has important design implications for the WFIRST exoplanet microlensing survey. 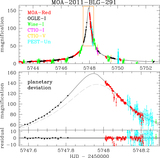