We present the analysis of the microlensing event MOA-2010-BLG-117, and show that the light curve can only be explained by the gravitational lensing of a binary source star system by a star with a Jupiter-mass ratio planet. It was necessary to modify standard microlensing modeling methods to find the correct light curve solution for this binary source, binary-lens event. We are able to measure a strong microlensing parallax signal, which yields the masses of the host star, M * = 0.58 ± 0.11 M ⊙, and planet, m p = 0.54 ± 0.10M Jup, at a projected star-planet separation of a ⊥ = 2.42 ± 0.26 au, corresponding to a semimajor axis of a=2.9≥nfrac{}{}{0em}{}{+1.6}{-0.6} au. Thus, the system resembles a half-scale model of the Sun-Jupiter system with a half-Jupiter0mass planet orbiting a half-solar-mass star at very roughly half of Jupiter’s orbital distance from the Sun. The source stars are slightly evolved, and by requiring them to lie on the same isochrone, we can constrain the source to lie in the near side of the bulge at a distance of D S = 6.9 ± 0.7 kpc, which implies a distance to the planetary lens system of D L = 3.5 ± 0.4 kpc. The ability to model unusual planetary microlensing events, like this one, will be necessary to extract precise statistical information from the planned large exoplanet microlensing surveys, such as the WFIRST microlensing survey. 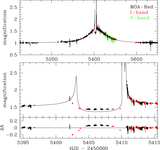