Ultra-short period (USP) planets are a class of low-mass planets with periods shorter than one day. Their origin is still unknown, with photo-evaporation of mini-Neptunes and in situ formation being the most credited hypotheses. Formation scenarios differ radically in the predicted composition of USP planets, and it is therefore extremely important to increase the still limited sample of USP planets with precise and accurate mass and density measurements. We report here the characterization of a USP planet with a period of 0.28 days around K2-141 (EPIC 246393474), and the validation of an outer planet with a period of 7.7 days in a grazing transit configuration. We derived the radii of the planets from the K2 light curve and used high-precision radial velocities gathered with the HARPS-N spectrograph for mass measurements. For K2-141b, we thus inferred a radius of 1.51 ± 0.05 R {}\oplus and a mass of 5.08 ± 0.41 M {}\oplus , consistent with a rocky composition and lack of a thick atmosphere. K2-141c is likely a Neptune-like planet, although due to the grazing transits and the non-detection in the RV data set, we were not able to put a strong constraint on its density. We also report the detection of secondary eclipses and phase curve variations for K2-141b. The phase variation can be modeled either by a planet with a geometric albedo of 0.30 ± 0.06 in the Kepler bandpass, or by thermal emission from the surface of the planet at ∼3000 K. Only follow-up observations at longer wavelengths will allow us to distinguish between these two scenarios. 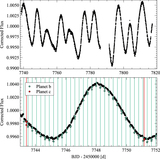