Context. Spectropolarimetry is a powerful technique for investigating the physical properties of gas and solid materials in cometary comae without mutual contamination, but only a few spectropolarimetric studies have been conducted to extract each component.
Aims: We attempt to derive the continuum (i.e., scattered light from dust coma) polarization degree of comet 2P/Encke, free of the influence of molecular emissions. The target is unique in that its orbit is dynamically decoupled from Jupiter, like the main-belt asteroids, but it ejects gas and dust like ordinary comets.
Methods: We observed the comet using the Hiroshima Optical and Near-Infrared Camera attached to the Cassegrain focus of the 150 cm Kanata telescope on UT 2017 February 21 when the comet was at the solar phase angle of α = 75°.7.
Results: We find that the continuum polarization degree with respect to the scattering plane is Pcont, r = 33.8 ± 2.7% at the effective wavelength of 0.82 μm, which is significantly higher than those of cometary dust in a high-Pmax group at similar phase angles. Assuming that an ensemble polarimetric response of the dust of 2P/Encke as a function of phase angle is morphologically similar with those of other comets, its maximum polarization degree is estimated to Pmax ≳ 40% at αmax ≈ 100°. In addition, we obtain the polarization degrees of the C2 swan bands (0.51-0.56 μm), the NH2 α bands (0.62-0.69 μm), and the CN-red system (0.78-0.94 μm) in a range of 3-19%, which depend on the molecular species and rotational quantum numbers of each branch. The polarization vector is aligned nearly perpendicularly to the scattering plane with an average of 0°.4 over a wavelength range of 0.50-0.97 μm.
Conclusions: From the observational evidence, we conjecture that the high polarization degree of 2P/Encke might be attributable to a dominance of large dust particles around the nucleus, which have remained after frequent perihelion passages near the Sun. 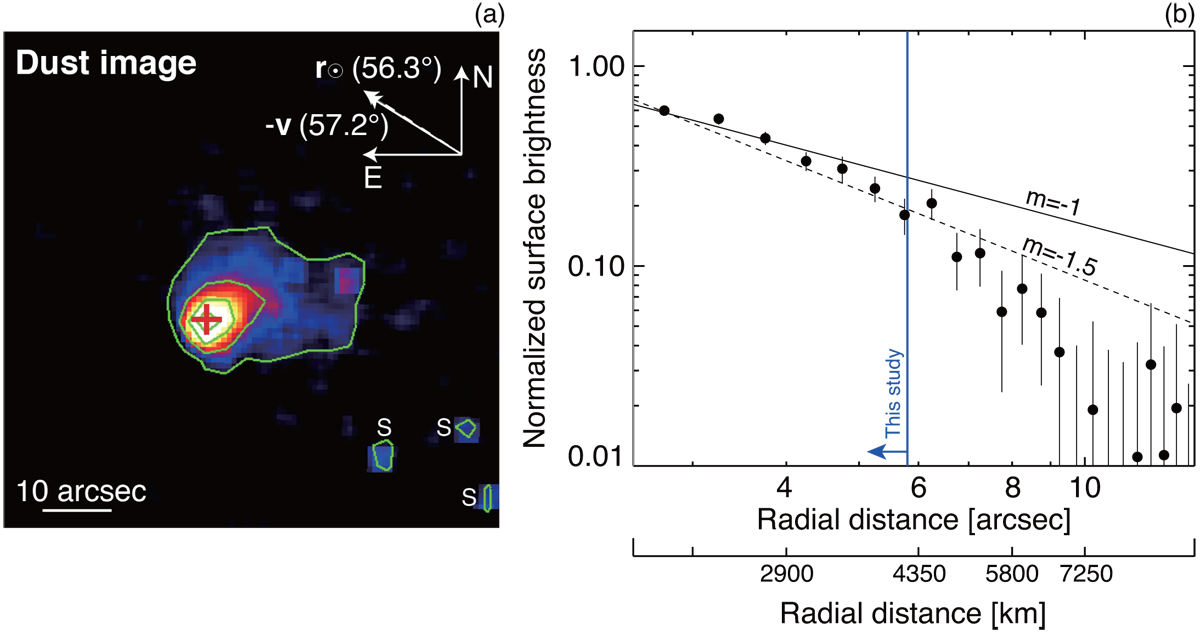