Aims: The standard active galactic nuclei (AGN)-galaxy co-evolutionary scenario predicts a phase of deeply "buried" supermassive black hole growth coexisting with a starburst (SB) before feedback phenomena deplete the cold molecular gas reservoir of the galaxy and an optically luminous quasar (QSO) is revealed (called the SB-QSO evolutionary sequence). The aim of this work is to measure the cold gas reservoir of three highly obscured QSOs to test if their gas fraction is similar to that of submillimetre galaxies (SMGs), as expected by some models, and to place these measurements in the context of the SB-QSO framework.
Methods: We target CO(1-0) transition in BzK4892, a Compton thick (CT) QSO at z = 2.6, CO(1-0) in BzK8608 and CO(2-1) in CDF153, two highly obscured (NH ≈ 6 × 1023 cm-2) QSOs at z = 2.5 and z = 1.5, respectively. For these targets, we place 3σ upper limits on the CO lines, with L'CO < (1.5 ÷ 2.8)×1010 K km s-1 pc2. We also compare the molecular gas conditions of our targets with those of other systems at z > 1, considering normal star-forming galaxies and SMGs, and unobscured and obscured AGN from the literature. For the AGN samples, we provide an updated and almost complete collection of targets with CO follow-up at z > 1.
Results: BzK4892 displays a high star formation efficiency (SFE = LIR/L'CO > 410 L☉/(K km s-1 pc2 )) and a gas fraction fgas = Mgas/(Mstar + Mgas)< 10%. Less stringent constraints are derived for the other two targets (fgas < 0.5 and SFE > 10 L☉/(K km s-1 pc2 )). From the comparison with the literature data we found that, on average, i) obscured AGN at z > 1 are associated with higher SFE and lower fgas with respect to normal star-forming galaxies and SMGs; ii) mildly and highly obscured active galaxies have comparable gas fractions; iii) the SFE of CT and obscured AGN are similar to those of unobscured AGN.
Conclusions: Within the SB-QSO framework, these findings could be consistent with a scenario where feedback can impact the host galaxy already from the early phases of the SB-QSO evolutionary sequence. 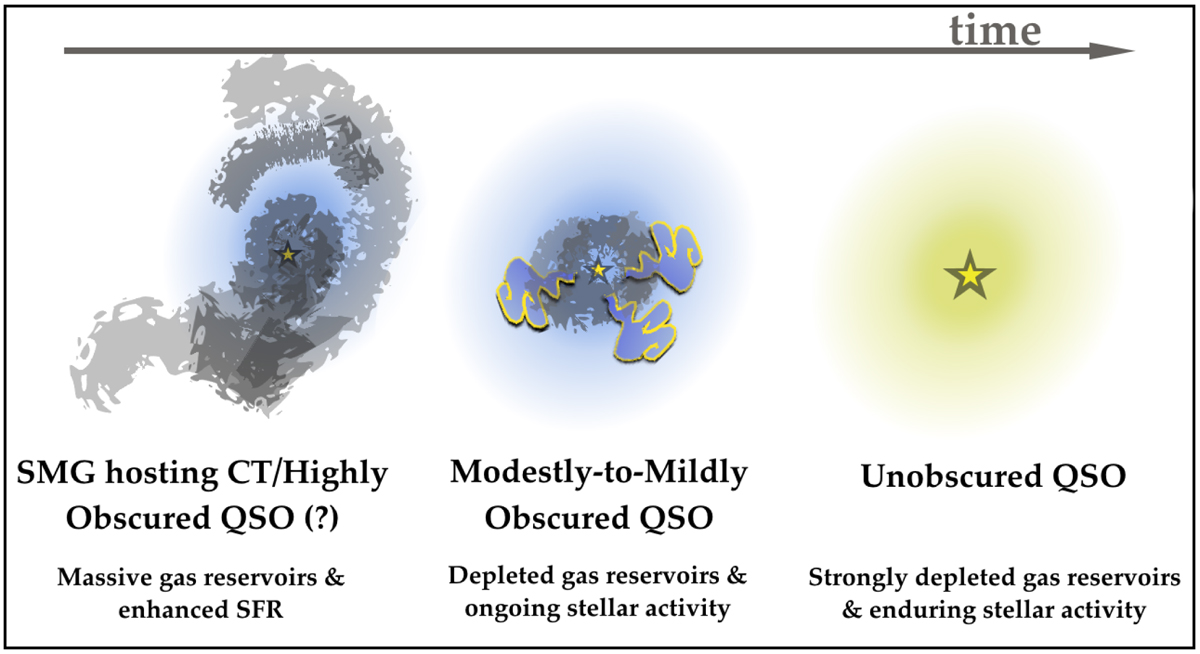