Context. HD 95086 (A8V, 17 Myr) hosts a rare planetary system for which a multi-belt debris disk and a giant planet of 4-5 MJup have been directly imaged.
Aims: Our study aims to characterize the global architecture of this young system using the combination of radial velocity and direct imaging observations. We want to characterize the physical and orbital properties of HD 95086 b, search for additional planets at short and wide orbits and image the cold outer debris belt in scattered light.
Methods: We used HARPS at the ESO 3.6 m telescope to monitor the radial velocity of HD 95086 over two years and investigate the existence of giant planets at less than 3 au orbital distance. With the IRDIS dual-band imager and the IFS integral field spectrograph of SPHERE at VLT, we imaged the faint circumstellar environment beyond 10 au at six epochs between 2015 and 2017.
Results: We do not detect additional giant planets around HD 95086. We identify the nature (bound companion or background contaminant) of all point-like sources detected in the IRDIS field of view. None of them correspond to the ones recently discovered near the edge of the cold outer belt by ALMA. HD 95086 b is resolved for the first time in J-band with IFS. Its near-infrared spectral energy distribution is well fitted by a few dusty and/or young L7-L9 dwarf spectral templates. The extremely red 1-4 μm spectral distribution is typical of low-gravity objects at the L/T spectral type transition. The planet's orbital motion is resolved between January 2015 and May 2017. Together with past NaCo measurements properly re-calibrated, our orbital fitting solutions favor a retrograde low to moderate-eccentricity orbit e = 0.2+0.3-0.2, with a semi-major axis 52 au corresponding to orbital periods of 288 yr and an inclination that peaks at i = 141°, which is compatible with a planet-disk coplanar configuration. Finally, we report the detection in polarimetric differential imaging of the cold outer debris belt between 100 and 300 au, consistent in radial extent with recent ALMA 1.3 mm resolved observations. 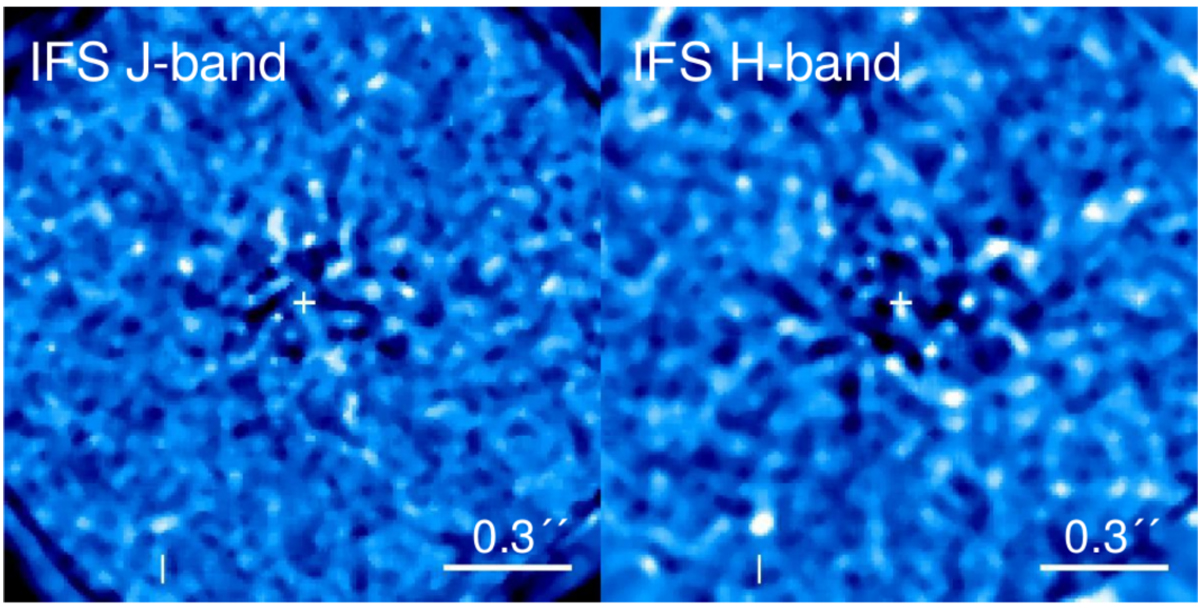