Context. Dynamic model atmospheres of Mira stars predict variabilities in the photospheric radius and in atmospheric molecular layers which are not yet strongly constrained by observations.
Aims: Here we measure the variability of the oxygen-rich Mira star R Peg in near-continuum and molecular bands.
Methods: We used near-infrared K-band spectro-interferometry with a spectral resolution of about 4000 obtained at four epochs between post-maximum and minimum visual phases employing the newly available GRAVITY beam combiner at the Very Large Telescope Interferometer (VLTI).
Results: Our observations show a continuum radius that is anti-correlated with the visual lightcurve. Uniform disc (UD) angular diameters at a near-continuum wavelength of 2.25 μm are steadily increasing with values of 8.7 ± 0.1 mas, 9.4 ± 0.1 mas, 9.8 ± 0.1 mas, and 9.9 ± 0.1 mas at visual phases of 0.15, 0.36, 0,45, 0.53, respectively. UD diameters at a bandpass around 2.05 μm, dominated by water vapour, follow the near-continuum variability at larger UD diameters between 10.7 mas and 11.7 mas. UD diameters at the CO 2-0 bandhead, instead, are correlated with the visual lightcurve and anti-correlated with the near-continuum UD diameters, with values between 12.3 mas and 11.7 mas.
Conclusions: The observed anti-correlation between continuum radius and visual lightcurve is consistent with an earlier study of the oxygen-rich Mira S Lac, and with recent 1D CODEX dynamic model atmosphere predictions. The amplitude of the variation is comparable to the earlier observations of S Lac, and smaller than predicted by CODEX models. The wavelength-dependent visibility variations at our epochs can be reproduced by a set of CODEX models at model phases between 0.3 and 0.6. The anti-correlation of water vapour and CO contributions at our epochs suggests that these molecules undergo different processes in the extended atmosphere along the stellar cycle. The newly available GRAVITY instrument is suited to conducting longer time series observations, which are needed to provide strong constraints on the model-predicted intra- and inter-cycle variability.

Based on observations made with the VLT Interferometer at Paranal Observatory under programme IDs 60.A-9176 and 098.D-0647. 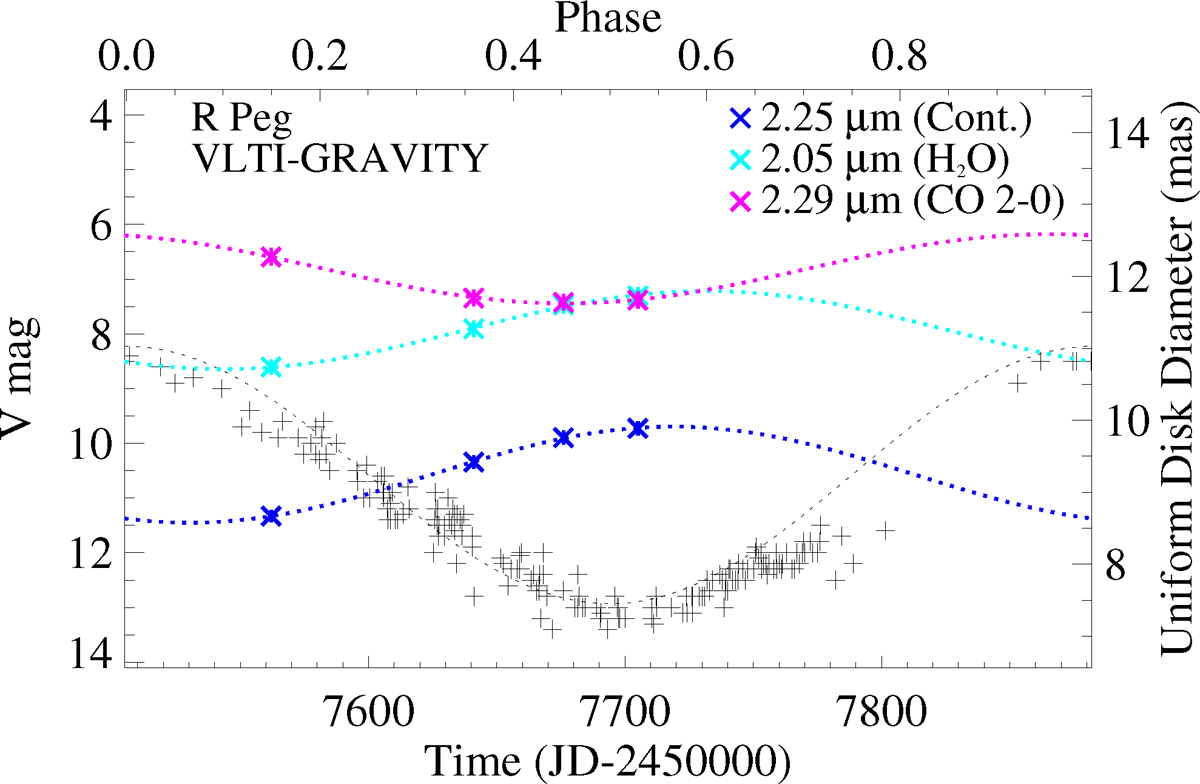