The Wolf-Rayet (WR) nebula NGC 3199 has been suggested to be a bow shock around its central star, WR 18, which is presumably a runaway star, because optical images of the nebula show a dominating arc of emission southwest of the star. We present the XMM-Newton detection of extended X-ray emission from NGC 3199, unveiling the powerful effect of the fast wind from WR 18. The X-ray emission is brighter in the region southeast of the star and an analysis of the spectral properties of the X-ray emission reveals abundance variations: (i) regions close to the optical arc present nitrogen-rich gas enhanced by the stellar wind from WR 18 and (ii) gas at the eastern region exhibits abundances close to those reported for the nebular abundances derived from optical studies, which is a signature of an efficient mixing of the nebular material with the stellar wind. The dominant plasma temperature and electron density are estimated to be T ≈ 1.2 × 106 K and n e = 0.3 cm-3 with an X-ray luminosity in the 0.3-3.0 keV energy range of L X = 2.6 × 1034 erg s-1. Combined with information derived from Herschel and the recent Gaia first data release, we conclude that WR 18 is not a runaway star and that the formation, chemical variations, and the shape of NGC 3199 depend on the initial configuration of the interstellar medium. 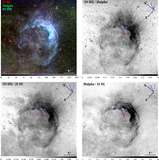