Using the Hubble Space Telescope, we identify circumnuclear (100-500 pc scale) structures in nine new H2O megamaser host galaxies to understand the flow of matter from kpc-scale galactic structures down to the supermassive black holes (SMBHs) at galactic centers. We double the sample analyzed in a similar way by Greene et al. and consider the properties of the combined sample of 18 sources. We find that disk-like structure is virtually ubiquitous when we can resolve <200 pc scales, in support of the notion that non-axisymmetries on these scales are a necessary condition for SMBH fueling. We perform an analysis of the orientation of our identified nuclear regions and compare it with the orientation of megamaser disks and the kpc-scale disks of the hosts. We find marginal evidence that the disk-like nuclear structures show increasing misalignment from the kpc-scale host galaxy disk as the scale of the structure decreases. In turn, we find that the orientation of both the ∼100 pc scale nuclear structures and their host galaxy large-scale disks is consistent with random with respect to the orientation of their respective megamaser disks. 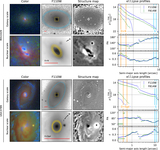