We present the first results of the Subaru/Hyper Suprime-Cam survey of the interacting galaxy system, NGC 4631 and NGC 4656. From the maps of resolved stellar populations, we identify 11 dwarf galaxies (including already-known dwarfs) in the outer region of NGC 4631 and the two tidal stellar streams around NGC 4631, named Stream SE and Stream NW, respectively. This paper describes the fundamental properties of these tidal streams. Based on the tip of the red giant branch method and the Bayesian statistics, we find that Stream SE (7.10 Mpc in expected a posteriori, EAP, with 90% credible intervals of [6.22, 7.29] Mpc) and Stream NW (7.91 Mpc in EAP with 90% credible intervals of [6.44, 7.97] Mpc) are located in front of and behind NGC 4631, respectively. We also calculate the metallicity distribution of stellar streams by comparing the member stars with theoretical isochrones on the color-magnitude diagram. We find that both streams have the same stellar population based on the Bayesian model selection method, suggesting that they originated from a tidal interaction between NGC 4631 and a single dwarf satellite. The expected progenitor has a positively skewed metallicity distribution function with {[M/H]}{EAP}=-0.92, with 90% credible intervals of [-1.46, -0.51]. The stellar mass of the progenitor is estimated as 3.7× {10}8 {M}⊙ , with 90% credible intervals of [5.8× {10}6,8.6× {10}9] {M}⊙ based on the mass-metallicity relation for Local group dwarf galaxies. This is in good agreement with the initial stellar mass of the progenitor that was presumed in the previous N-body simulation. 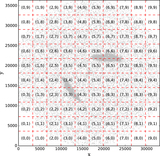