The double red clump (RC) observed in the Milky Way bulge is widely interpreted as evidence for an X-shaped structure. We have recently suggested, however, an alternative interpretation based on the multiple population phenomenon, where the bright RC is from helium-enhanced second-generation stars (G2), while the faint RC is representing first-generation stars (G1) with normal helium abundance. Here, our RC models are constructed in a large parameter space to see the effects of metallicity, age, and helium abundance on the double RC feature. Our models show that the luminosity of RC stars is mainly affected by helium abundance, while the RC color is primarily affected by metallicity. The effect of age is relatively small, unless it is older than 12 Gyr or much younger than 6 Gyr. The observed double RC feature can therefore be reproduced in a relatively large parameter space, once ∆Y between G2 and G1 is assumed to be greater than ∼0.10. We further show that the longitude dependence of the double RC feature at b≈ -8^\circ , which was pointed out by Gonzalez et al. as a potential problem of our model, is well explained in our scenario by a classical bulge embedded in a tilted bar. 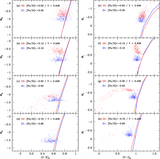