The deuterium enrichment of molecules is sensitive to their formation environment. Constraining patterns of deuterium chemistry in protoplanetary disks is therefore useful for probing how material is inherited or reprocessed throughout the stages of star and planet formation. We present ALMA observations at ∼0.″6 resolution of DCO+, H13CO+, DCN, and H13CN in the full disks around T Tauri stars AS 209 and IM Lup, in the transition disks around T Tauri stars V4046 Sgr and LkCa 15, and in the full disks around Herbig Ae stars MWC 480 and HD 163296. We also present ALMA observations of HCN in the IM Lup disk. DCN, DCO+, and H13CO+ are detected in all disks, and H13CN in all but the IM Lup disk. We find efficient deuterium fractionation for the sample, with estimates of disk-averaged DCO+/HCO+ and DCN/HCN abundance ratios ranging from ∼0.02-0.06 and ∼0.005-0.08, respectively, which is comparable to values reported for other interstellar environments. The relative distributions of DCN and DCO+ vary between disks, suggesting that multiple formation pathways may be needed to explain the diverse emission morphologies. In addition, gaps and rings observed in both H13CO+ and DCO+ emission provide new evidence that DCO+ bears a complex relationship with the location of the midplane CO snowline. 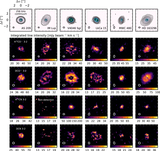