Stellar Clusterings around "Isolated" Massive YSOs in the LMC

Observations suggest that there is a significant fraction of O stars in the field of the Milky Way that appear to have formed in isolation or in low-mass clusters (<100 {M}⊙ ). The existence of these high-mass stars that apparently formed in the field challenges the generally accepted paradigm, which requires star formation to occur in clustered environments. In order to understand the physical conditions for the formation of these stars, it is necessary to observe isolated high-mass stars while they are still forming. With the Hubble Space Telescope, we observe the seven most isolated massive (>8 {M}⊙ ) young stellar objects (MYSOs) in the Large Magellanic Cloud. The observations show that while these MYSOs are remote from other MYSOs, OB associations, and even known giant molecular clouds, they are actually not isolated at all. Imaging reveals ∼100 to several hundred pre-main-sequence (PMS) stars in the vicinity of each MYSO. These previously undetected PMS stars form prominent compact clusters around the MYSOs, and in most cases they are also distributed sparsely across the observed regions. Contrary to what previous high-mass field star studies show, these observations suggest that high-mass stars may not be able to form in clusters with masses less than 100 {M}⊙ . If these MYSOs are indeed the best candidates for isolated high-mass star formation, then the lack of isolation is at odds with random sampling of the initial mass function. Moreover, while isolated MYSOs may not exist, we find evidence that isolated clusters containing O stars can exist, which in itself is rare. 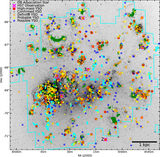