Context. From a light curve acquired through the K2 space mission, the star K2-111(EPIC 210894022) has been identified as possibly orbited by a transiting planet.
Aims: Our aim is to confirm the planetary nature of the object and derive its fundamental parameters.
Methods: We analyse the light curve variations during the planetary transit using packages developed specifically for exoplanetary transits. Reconnaissance spectroscopy and radial velocity observations have been obtained using three separate telescope and spectrograph combinations. The spectroscopic synthesis package SME has been used to derive the stellar photospheric parameters that were used as input to various stellar evolutionary tracks in order to derive the parameters of the system. The planetary transit was also validated to occur on the assumed host star through adaptive imaging and statistical analysis.
Results: The star is found to be located in the background of the Hyades cluster at a distance at least 4 times further away from Earth than the cluster itself. The spectrum and the space velocities of K2-111 strongly suggest it to be a member of the thick disk population. The co-added high-resolution spectra show that that it is a metal poor ([Fe/H] = - 0.53 ± 0.05 dex) and α-rich somewhat evolved solar-like star of spectral type G3. We find Teff = 5730 ± 50 K, log g⋆ = 4.15 ± 0.1 cgs, and derive a radius of R⋆ = 1.3 ± 0.1 R⊙ and a mass of M⋆ = 0.88 ± 0.02 M⊙. The currently available radial velocity data confirms a super-Earth class planet with a mass of 8.6 ± 3.9 M⊕ and a radius of 1.9 ± 0.2 R⊕. A second more massive object with a period longer than about 120 days is indicated by a long-term radial velocity drift.
Conclusions: The radial velocity detection together with the imaging confirms with a high level of significance that the transit signature is caused by a planet orbiting the star K2-111. This planet is also confirmed in the radial velocity data. A second more massive object (planet, brown dwarf, or star) has been detected in the radial velocity signature. With an age of ≳10 Gyr this system is one of the oldest where planets are hitherto detected. Further studies of this planetary system are important since it contains information about the planetary formation process during a very early epoch of the history of our Galaxy. 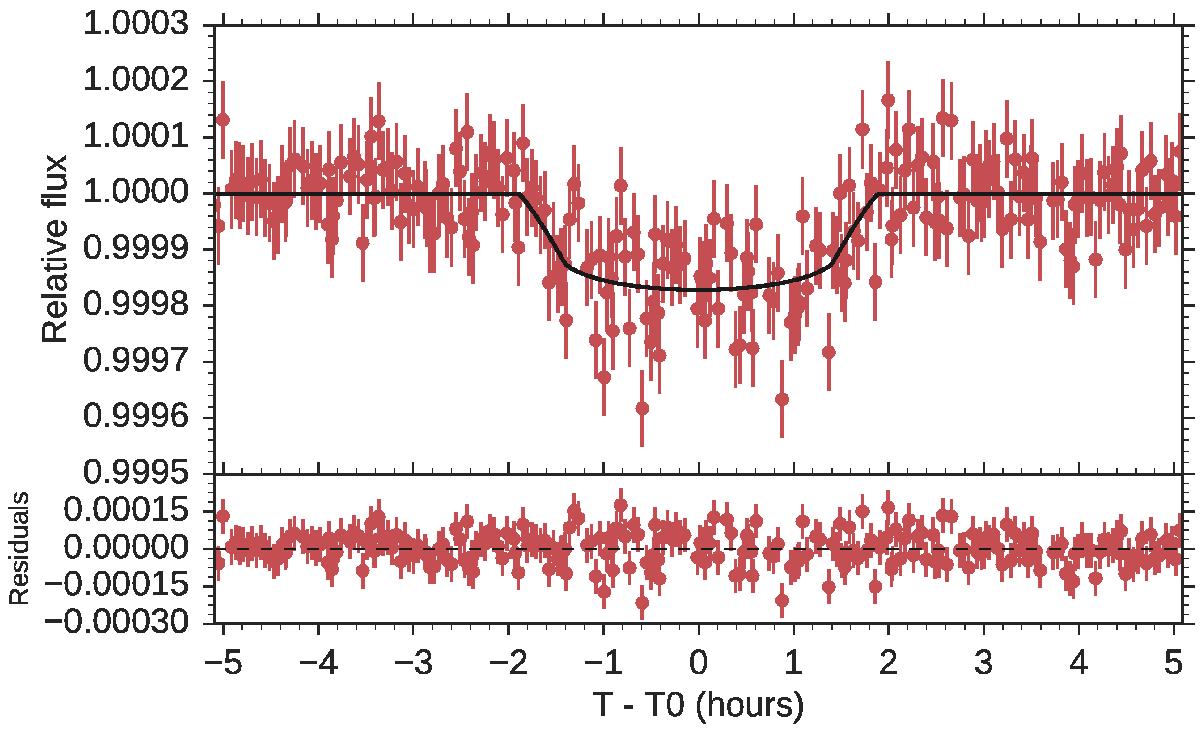