The 999th Swift gamma-ray burst: Some like it thermal. A multiwavelength study of GRB 151027A

We present a multiwavelength study of GRB 151027A. This is the 999th gamma-ray burst detected by the Swift satellite and it has a densely sampled emission in the X-ray and optical band and has been observed and detected in the radio up to 140 days after the prompt. The multiwavelength light curve from 500 s to 140 days can be modelled through a standard forward shock afterglow, but it requires an additional emission component to reproduce the early X-ray and optical emission. We present optical observations performed with the Telescopio Nazionale Galileo (TNG) and the Large Binocular Telescope (LBT) 19.6, 33.9, and 92.3 days after the trigger which show a bump with respect to a standard afterglow flux decay and are interpreted as possibly due to the underlying supernova and host galaxy (at a level of 0.4 μJy in the optical R band, RAB 25). Radio observations, performed with the Sardinia Radio Telescope (SRT) and Medicina in single-dish mode and with the European Very Long Baseline Interferometer (VLBI) Network and the Very Long Baseline Array (VLBA), between day 4 and 140 suggest that the burst exploded in an environment characterized by a density profile scaling with the distance from the source (wind profile). A remarkable feature of the prompt emission is the presence of a bright flare 100 s after the trigger, lasting 70 s in the soft X-ray band, which was simultaneously detected from the optical band up to the MeV energy range. By combining Swift-BAT/XRT and Fermi-GBM data, the broadband (0.3-1000 keV) time resolved spectral analysis of the flare reveals the coexistence of a non-thermal (power law) and thermal blackbody components. The blackbody component contributes up to 35% of the luminosity in the 0.3-1000 keV band. The γ-ray emission observed in Swift-BAT and Fermi-GBM anticipates and lasts less than the soft X-ray emission as observed by Swift-XRT, arguing against a Comptonization origin. The blackbody component could either be produced by an outflow becoming transparent or by the collision of a fast shell with a slow, heavy, and optically thick fireball ejected during the quiescent time interval between the initial and later flares of the burst. 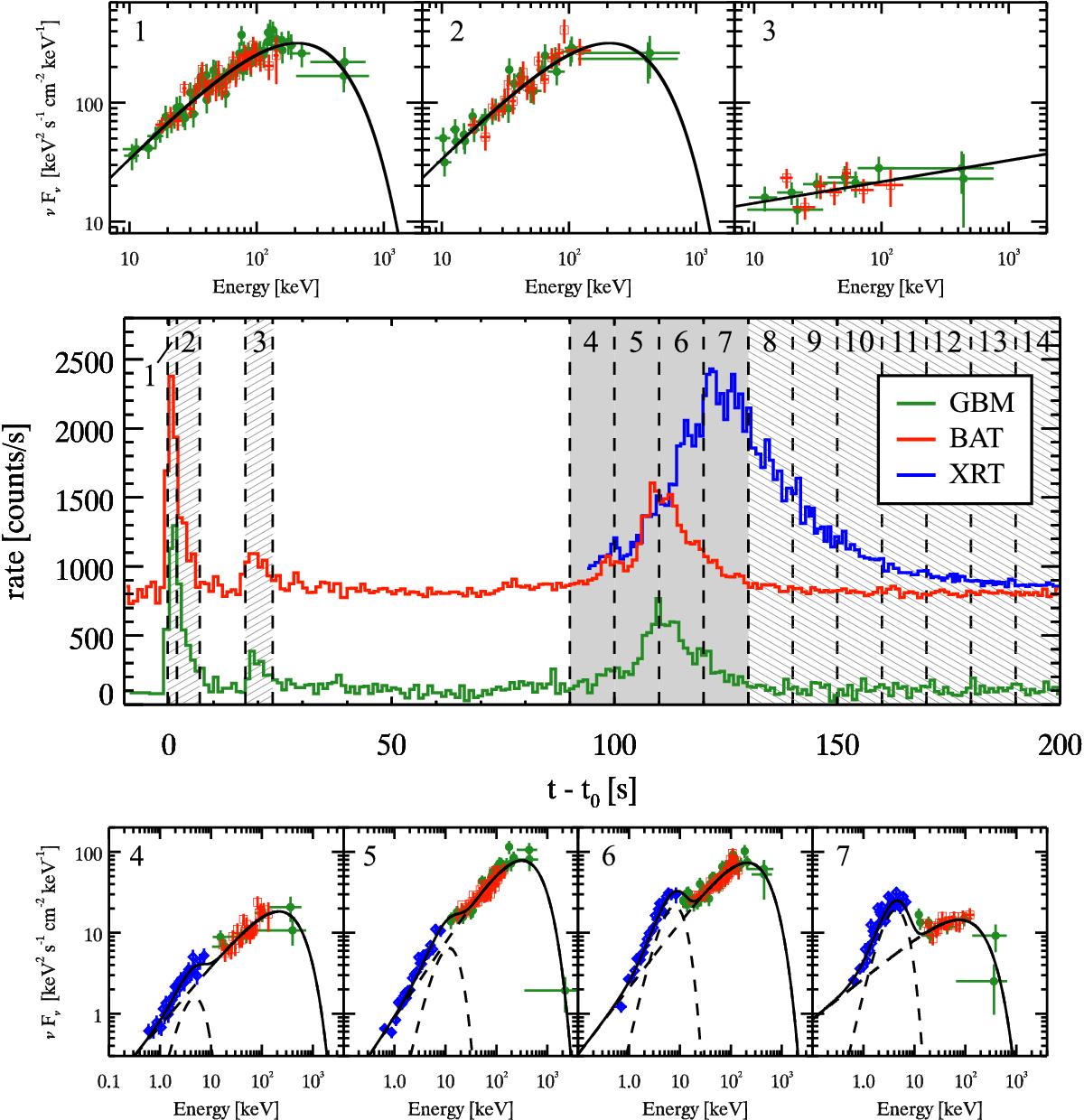