Shadows and spirals in the protoplanetary disk HD 100453

Context. Understanding the diversity of planets requires studying the morphology and physical conditions in the protoplanetary disks in which they form.
Aims: We aim to study the structure of the ~10 Myr old protoplanetary disk HD 100453, to detect features that can trace disk evolution and to understand the mechanisms that drive these features.
Methods: We observed HD 100453 in polarized scattered light with VLT/SPHERE at optical (0.6 μm, 0.8 μm) and near-infrared (1.2 μm) wavelengths, reaching an angular resolution of ~0.02'', and an inner working angle of ~0.09''.
Results: We spatially resolve the disk around HD 100453, and detect polarized scattered light up to ~0.42'' (~48 au). We detect a cavity, a rim with azimuthal brightness variations at an inclination of ~38° with respect to our line of sight, two shadows and two symmetric spiral arms. The spiral arms originate near the location of the shadows, close to the semi major axis. We detect a faint feature in the SW that can be interpreted as the scattering surface of the bottom side of the disk, if the disk is tidally truncated by the M-dwarf companion currently seen at a projected distance of ~119 au. We construct a radiative transfer model that accounts for the main characteristics of the features with an inner and outer disk misaligned by ~72°. The azimuthal brightness variations along the rim are well reproduced with the scattering phase function of the model. While spirals can be triggered by the tidal interaction with the companion, the close proximity of the spirals to the shadows suggests that the shadows could also play a role. The change in stellar illumination along the rim induces an azimuthal variation of the scale height that can contribute to the brightness variations.
Conclusions: Dark regions in polarized images of transition disks are now detected in a handful of disks and often interpreted as shadows due to a misaligned inner disk. However, the origin of such a misalignment in HD 100453, and of the spirals, is still unclear, and might be due to a yet-undetected massive companion inside the cavity, and on an inclined orbit. Observations over a few years will allow us to measure the spiral pattern speed, and determine if the shadows are fixed or moving, which may constrain their origin.

Based on observations performed with VLT/SPHERE under program ID 096.C-0248(B). 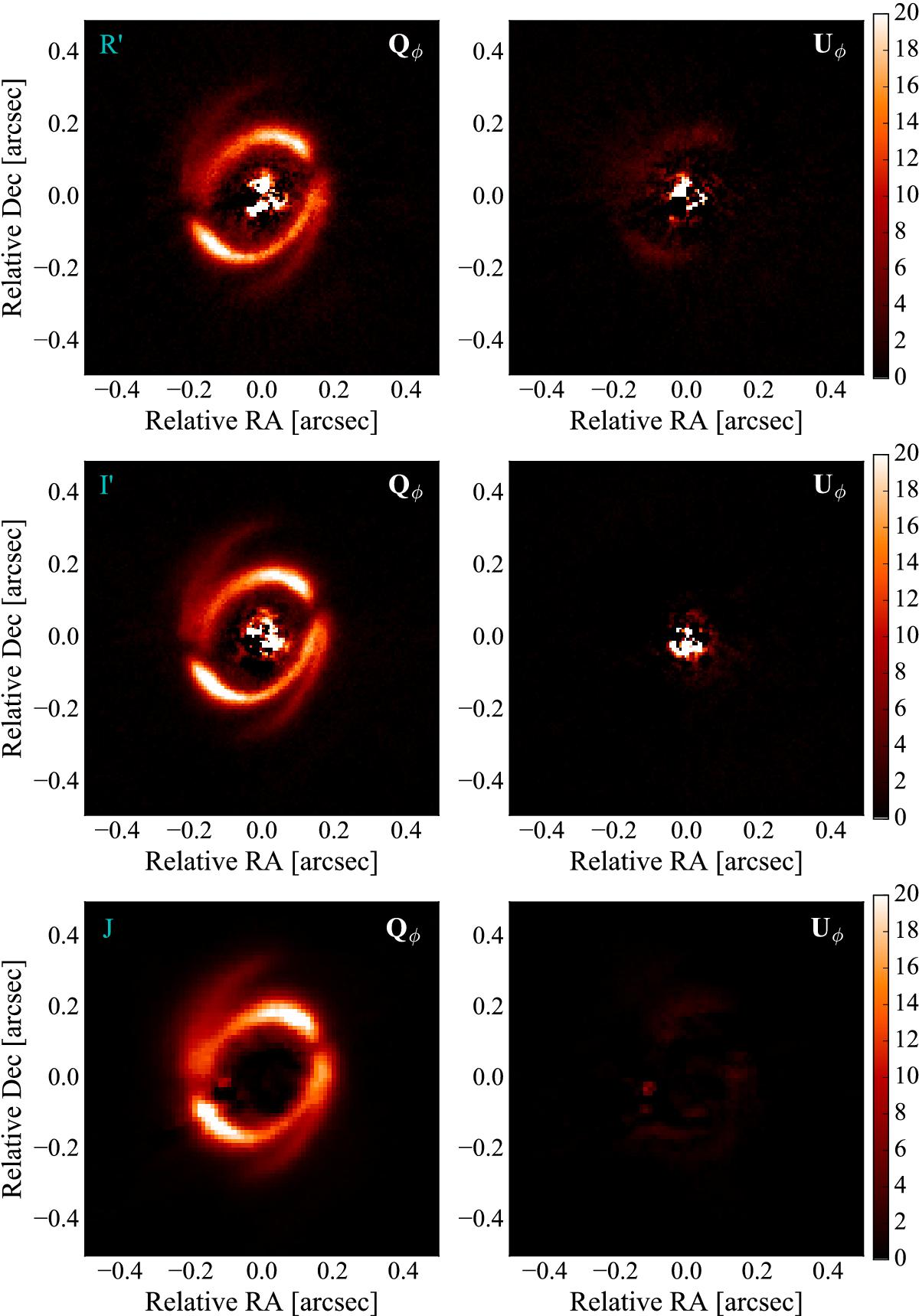