We present direct estimates of the mean sky brightness temperature in observing bands around 99 and 242 GHz due to line emission from distant galaxies. These values are calculated from the summed line emission observed in a blind, deep survey for spectral line emission from high redshift galaxies using ALMA (the ALMA spectral deep field observations “ASPECS” survey). In the 99 GHz band, the mean brightness will be dominated by rotational transitions of CO from intermediate and high redshift galaxies. In the 242 GHz band, the emission could be a combination of higher order CO lines, and possibly [C II] 158 μm line emission from very high redshift galaxies (z ∼ 6-7). The mean line surface brightness is a quantity that is relevant to measurements of spectral distortions of the cosmic microwave background, and as a potential tool for studying large-scale structures in the early universe using intensity mapping. While the cosmic volume and the number of detections are admittedly small, this pilot survey provides a direct measure of the mean line surface brightness, independent of conversion factors, excitation, or other galaxy formation model assumptions. The mean surface brightness in the 99 GHZ band is: T B = 0.94 ± 0.09 μK. In the 242 GHz band, the mean brightness is: T B = 0.55 ± 0.033 μK. These should be interpreted as lower limits on the average sky signal, since we only include lines detected individually in the blind survey, while in a low resolution intensity mapping experiment, there will also be the summed contribution from lower luminosity galaxies that cannot be detected individually in the current blind survey. 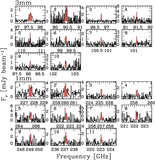