The spiral arms of the Milky Way are being accurately located for the first time via trigonometric parallaxes of massive star-forming regions with the Bar and Spiral Structure Legacy Survey, using the Very Long Baseline Array and the European VLBI Network, and with the Japanese VLBI Exploration of Radio Astrometry project. Here we describe a computer program that leverages these results to significantly improve the accuracy and reliability of distance estimates to other sources that are known to follow spiral structure. Using a Bayesian approach, sources are assigned to arms based on their (l, b, v) coordinates with respect to arm signatures seen in CO and H I surveys. A source's kinematic distance, displacement from the plane, and proximity to individual parallax sources are also considered in generating a full distance probability density function. Using this program to estimate distances to large numbers of star-forming regions, we generate a realistic visualization of the Milky Way's spiral structure as seen from the northern hemisphere. 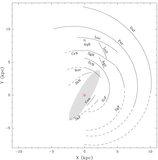