Short Gamma-Ray Bursts from the Merger of Two Black Holes

Short gamma-ray bursts (GRBs) are explosions of cosmic origins believed to be associated with the merger of two compact objects, either two neutron stars or a neutron star and a black hole (BH). The presence of at least one neutron star has long been thought to be an essential element of the model: its tidal disruption provides the needed baryonic material whose rapid accretion onto the post-merger BH powers the burst. The recent tentative detection by the Fermi satellite of a short GRB in association with the gravitational wave signal GW150914 produced by the merger of two BHs has challenged this standard paradigm. Here, we show that the evolution of two high-mass, low-metallicity stars with main-sequence rotational speeds a few tens of percent of the critical speed eventually undergoing a weak supernova explosion can produce a short GRB. The outer layers of the envelope of the last exploding star remain bound and circularize at large radii. With time, the disk cools and becomes neutral, suppressing the magnetorotational instability, and hence the viscosity. The disk remains “long-lived dead” until tidal torques and shocks during the pre-merger phase heat it up and re-ignite accretion, rapidly consuming the disk and powering the short GRB. 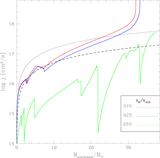