The next generation of ground- and space-based telescopes will image habitable planets around nearby stars. A growing literature describes how to characterize such planets with spectroscopy, but less consideration has been given to the usefulness of planet colors. Here, we investigate whether potentially Earth-like exoplanets could be identified using UV-visible-to-NIR wavelength broadband photometry (350-1000 nm). Specifically, we calculate optimal photometric bins for identifying an exo-Earth and distinguishing it from uninhabitable planets including both Solar System objects and model exoplanets. The color of some hypothetical exoplanets—particularly icy terrestrial worlds with thick atmospheres—is similar to Earth's because of Rayleigh scattering in the blue region of the spectrum. Nevertheless, subtle features in Earth's reflectance spectrum appear to be unique. In particular, Earth's reflectance spectrum has a “U-shape” unlike all our hypothetical, uninhabitable planets. This shape is partly biogenic because {{{O}}}2-rich, oxidizing air is transparent to sunlight, allowing prominent Rayleigh scattering, while ozone absorbs visible light, creating the bottom of the “U.” Whether such uniqueness has practical utility depends on observational noise. If observations are photon limited or dominated by astrophysical sources (zodiacal light or imperfect starlight suppression), then the use of broadband visible wavelength photometry to identify Earth twins has little practical advantage over obtaining detailed spectra. However, if observations are dominated by dark current, then optimized photometry could greatly assist preliminary characterization. We also calculate the optimal photometric bins for identifying extrasolar Archean Earths, and find that the Archean Earth is more difficult to unambiguously identify than a modern Earth twin. 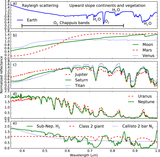