Slow Quenching of Star Formation in OMEGAWINGS Clusters: Galaxies in Transition in the Local Universe

The star formation quenching depends on environment, but a full understanding of what mechanisms drive it is still missing. Exploiting a sample of galaxies with masses {M}*\gt {10}9.8{M}⊙ , drawn from the WIde-field Nearby Galaxy-cluster Survey (WINGS) and its recent extension OMEGAWINGS, we investigate the star formation rate (SFR) as a function of stellar mass (M{}*) in galaxy clusters at 0.04\lt z\lt 0.07. We use non-member galaxies at 0.02 < z < 0.09 as a field control sample. Overall, we find agreement between the SFR-M{}* relation in the two environments, but detect a population of cluster galaxies with reduced SFRs, which is rare in the field. These transition galaxies are mainly found within the cluster virial radius (R200), but they impact on the SFR-M{}* relation only within 0.6R200. The ratio of transition to pure star-forming galaxies strongly depends on environment, being larger than 0.6 within 0.3R200 and rapidly decreasing with distance, while it is almost flat with M*. As galaxies move downward from the SFR-M{}* main sequence, they become redder and present older luminosity- and mass-weighted ages. These trends, together with the analysis of the star formation histories, suggest that transition galaxies have had a reduced SFR for the past 2-5 Gyr. Our results are consistent with the hypothesis that the interaction of galaxies with the intracluster medium via strangulation causes a gradual shut down of star formation, giving birth to an evolved population of galaxies in transition from being star forming to becoming passive. 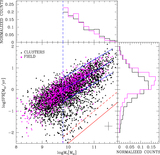