In a six-year program started in 2014 July, the Extended Baryon Oscillation Spectroscopic Survey (eBOSS) will conduct novel cosmological observations using the BOSS spectrograph at Apache Point Observatory. These observations will be conducted simultaneously with the Time Domain Spectroscopic Survey (TDSS) designed for variability studies and the Spectroscopic Identification of eROSITA Sources (SPIDERS) program designed for studies of X-ray sources. In particular, eBOSS will measure with percent-level precision the distance-redshift relation with baryon acoustic oscillations (BAO) in the clustering of matter. eBOSS will use four different tracers of the underlying matter density field to vastly expand the volume covered by BOSS and map the large-scale-structures over the relatively unconstrained redshift range 0.6 < z < 2.2. Using more than 250,000 new, spectroscopically confirmed luminous red galaxies at a median redshift z = 0.72, we project that eBOSS will yield measurements of the angular diameter distance dA(z) to an accuracy of 1.2% and measurements of H(z) to 2.1% when combined with the z > 0.6 sample of BOSS galaxies. With ∼195,000 new emission line galaxy redshifts, we expect BAO measurements of dA(z) to an accuracy of 3.1% and H(z) to 4.7% at an effective redshift of z = 0.87. A sample of more than 500,000 spectroscopically confirmed quasars will provide the first BAO distance measurements over the redshift range 0.9 < z < 2.2, with expected precision of 2.8% and 4.2% on dA(z) and H(z), respectively. Finally, with 60,000 new quasars and re-observation of 60,000 BOSS quasars, we will obtain new Lyα forest measurements at redshifts z > 2.1 these new data will enhance the precision of dA(z) and H(z) at z > 2.1 by a factor of 1.44 relative to BOSS. Furthermore, eBOSS will provide improved tests of General Relativity on cosmological scales through redshift-space distortion measurements, improved tests for non-Gaussianity in the primordial density field, and new constraints on the summed mass of all neutrino species. Here, we provide an overview of the cosmological goals, spectroscopic target sample, demonstration of spectral quality from early data, and projected cosmological constraints from eBOSS. 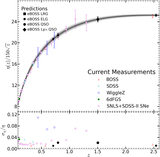