Evolution of flare ribbons, electric currents, and quasi-separatrix layers during an X-class flare

Context. The standard model for eruptive flares has been extended to three dimensions (3D) in the past few years. This model predicts typical J-shaped photospheric footprints of the coronal current layer, forming at similar locations as the quasi-separatrix layers (QSLs). Such a morphology is also found for flare ribbons observed in the extreme ultraviolet (EUV) band, and in nonlinear force-free field (NLFFF) magnetic field extrapolations and models.
Aims: We study the evolution of the photospheric traces of the current density and flare ribbons, both obtained with the Solar Dynamics Observatory instruments. We aim to compare their morphology and their time evolution, before and during the flare, with the topological features found in a NLFFF model.
Methods: We investigated the photospheric current evolution during the 06 September 2011 X-class flare (SOL2011-09-06T22:20) occurring in NOAA AR 11283 from observational data of the magnetic field obtained with the Helioseismic and Magnetic Imager aboard the Solar Dynamics Observatory. We compared this evolution with that of the flare ribbons observed in the EUV filters of the Atmospheric Imager Assembly. We also compared the observed electric current density and the flare ribbon morphology with that of the QSLs computed from the flux rope insertion method-NLFFF model.
Results: The NLFFF model shows the presence of a fan-spine configuration of overlying field lines, due to the presence of a parasitic polarity, embedding an elongated flux rope that appears in the observations as two parts of a filament. The QSL signatures of the fan configuration appear as a circular flare ribbon that encircles the J-shaped ribbons related to the filament ejection. The QSLs, evolved via a magnetofrictional method, also show similar morphology and evolution as both the current ribbons and the EUV flare ribbons obtained several times during the flare.
Conclusions: For the first time, we propose a combined analysis of the photospheric traces of an eruptive flare, in a complex topology, with direct measurements of electric currents and QSLs from observational data and a magnetic field model. The results, obtained by two different and independent approaches 1) confirm previous results of current increase during the impulsive phase of the flare and 2) show how NLFFF models can capture the essential physical signatures of flares even in a complex magnetic field topology.

A movie associated to Fig. 1 is available in electronic form at http://www.aanda.org 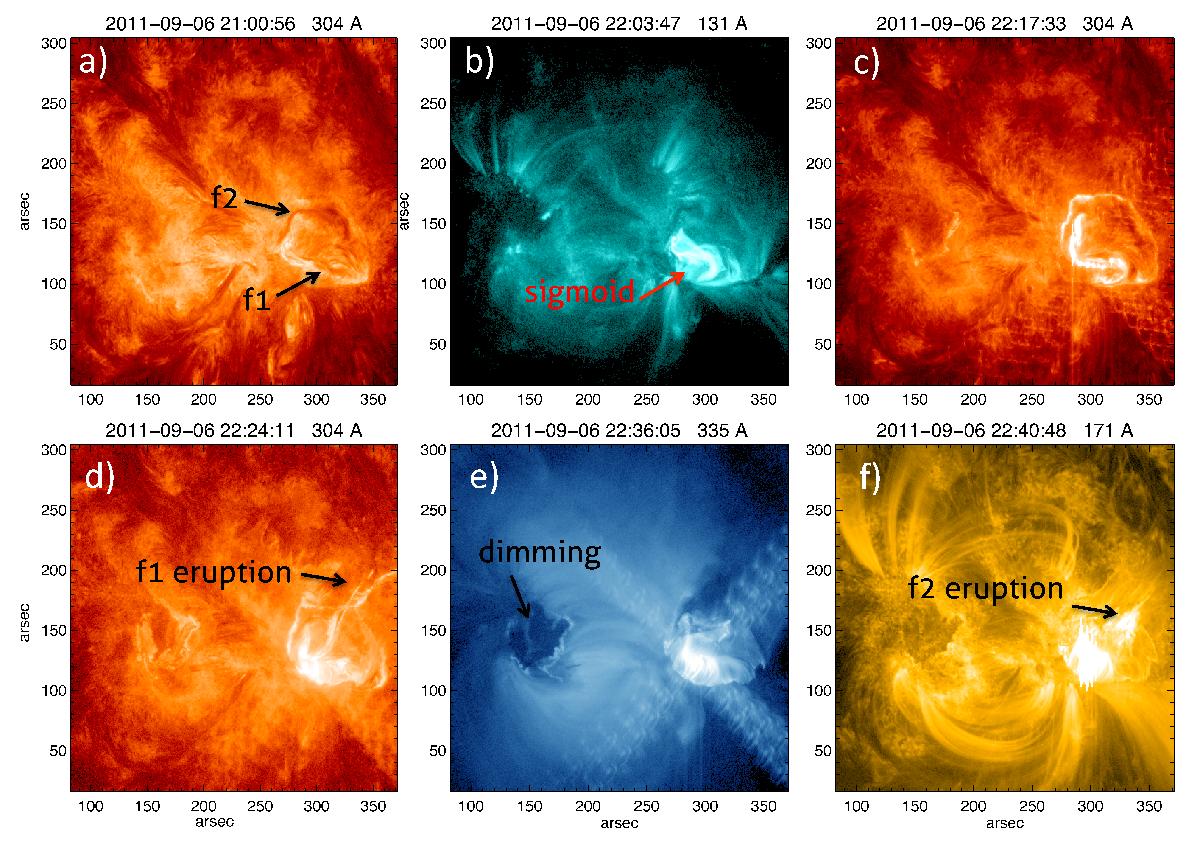