Context. Filamentary structures are ubiquitous in the interstellar medium. Investigating their connection to the large-scale structure of the Galaxy and their role in star formation is leading to a paradigm shift in our understanding of star formation.
Aims: We study the properties of filamentary structures from the ATLASGAL survey, which is the largest and most sensitive systematic ground-based survey of the inner Galactic plane at submillimeter wavelengths.
Methods: We use the DisPerSE algorithm to identify spatially coherent structures located across the inner-Galaxy (300° < ℓ < 60° and |b| < 1.5). As a result we produce a catalogue of ~1800 structures; these were then independently classified by the five lead authors into one of the following types: marginally resolved, elongated structures, filaments, network of filaments and complexes. This resulted in the identification of 517 filamentary structures. We determine their physical properties and investigate their overall Galactic distribution.
Results: We find that almost 70% of the total 870 μm flux associated with these structures resides in filaments and networks of filaments and we estimate that they are likely to be associated with a similar fraction of the mass. Correlating these structures with tracers of massive star formation we also find that a similar fraction of the massive star forming clumps are associated with filaments and networks of filaments, which highlights the importance of these types of structures to star formation in the Galaxy. We have determined distances, masses and physical sizes for 241 of the filamentary structures. We find a median distance of 3.8 kpc, a mean mass of a few 103 M⊙, a mean length of ~6 pc and a mass-to-length ratio of (M/L) ~200-2000 M⊙ pc-1. We also find that these filamentary structures are tightly correlated with the spiral arms in longitude and velocity, and that their semi-major axis is preferentially aligned parallel to the Galactic mid-plane and therefore with the direction of large-scale Galactic magnetic field. We find many examples where the dense filaments identified in ATLASGAL are associated with larger scale filamentary structures (~100 pc), and argue that this is likely to be common, and as such these may indicate a connection between large-scale Galactic dynamics and star formation.
Conclusions: We have produced a large and Galaxy-wide catalogue of dense filamentary structures that are representative of a particular size and mass range not previously well studied in the literature. Analyses of the properties and distribution of these filaments reveals that they are correlated with the spiral arms and make a significant contribution to star formation in the Galaxy. Massive star formation is ongoing within ~20% of the filaments and is strongly correlated with the filaments with the largest mass-to-length ratios. The luminosity of the embedded sources has a similar distribution to the Galactic-wide samples of young massive stars and can therefore be considered to be representative. 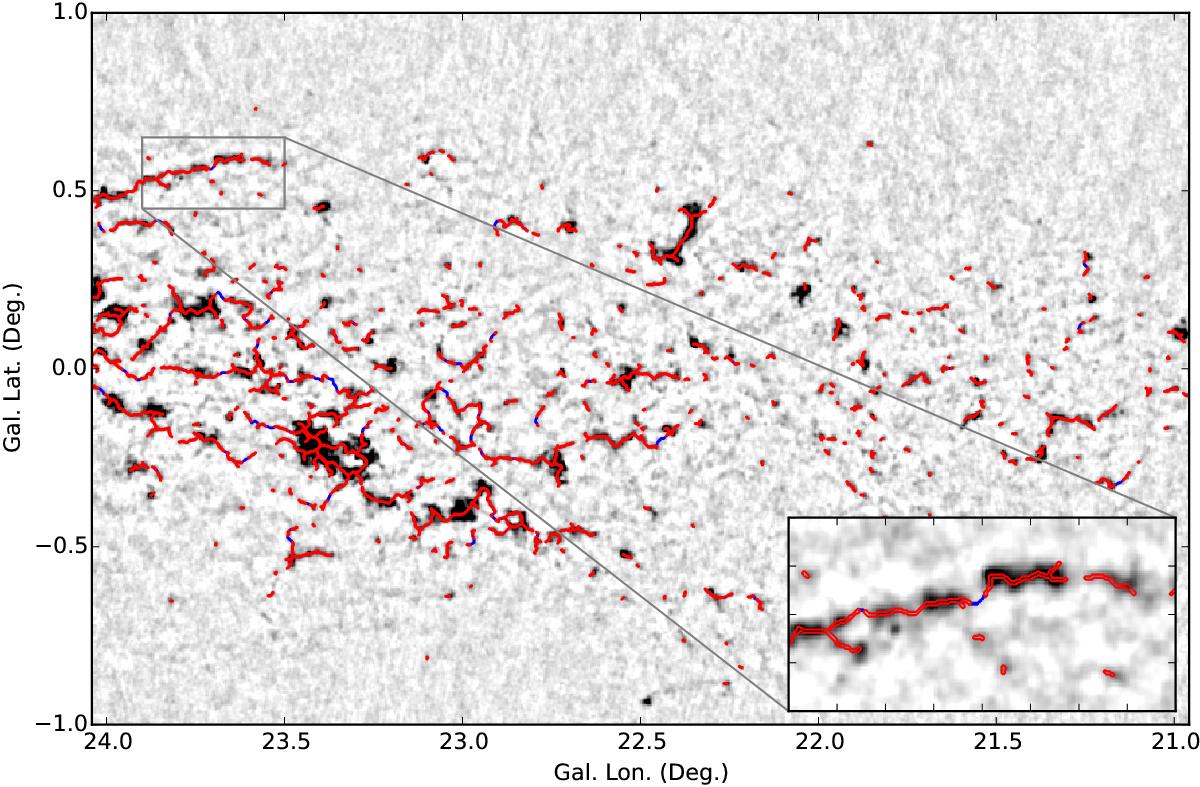