Chemical Abundances of Planetary Nebulae in the Substructures of M31

We present deep spectroscopy of planetary nebulae (PNe) that are associated with the substructures of the Andromeda Galaxy (M31). The spectra were obtained with the Optical System for Imaging and low-intermediate-Resolution Integrated Spectroscopy spectrograph on the 10.4 m Gran Telescopio Canarias. Seven targets were selected for the observations, three in the Northern Spur and four associated with the Giant Stream. The most distant target in our sample, with a rectified galactocentric distance ≥slant 100 kpc, was the first PN discovered in the outer streams of M31. The [O iii] λ4363 auroral line is well detected in the spectra of all targets, enabling electron temperature determination. Ionic abundances are derived based on the [O iii] temperatures, and elemental abundances of helium, nitrogen, oxygen, neon, sulfur, and argon are estimated. The relatively low N/O and He/H ratios, as well as abundance ratios of α-elements, indicate that our target PNe might belong to populations as old as ∼2 Gyr. Our PN sample, including the current seven and the previous three observed by Fang et al., have rather homogeneous oxygen abundances. The study of abundances and the spatial and kinematical properties of our sample leads to the tempting conclusion that their progenitors might belong to the same stellar population, which hints at a possibility that the Northern Spur and the Giant Stream have the same origin. This may be explained by the stellar orbit proposed by Merrett et al. Judging from the position and kinematics, we emphasize that M32 might be responsible for the two substructures. Deep spectroscopy of PNe in M32 will help to assess this hypothesis.

Based on observations made with the Gran Telescopio Canarias, installed at the Spanish Observatorio del Roque de los Muchachos of the Instituto de Astrofísica de Canarias, in the island of La Palma. These observations are associated with program No. GTC55-14B. 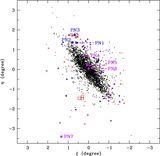