Cosmic Reionization after Planck: Could Quasars Do It All?

We assess a model of late cosmic reionization in which the ionizing background radiation arises entirely from high-redshift quasars and other active galactic nuclei (AGNs). The low optical depth to Thomson scattering reported by the Planck Collaboration pushes the redshift of instantaneous reionization down to z={8.8}-1.4+1.7 and greatly reduces the need for significant Lyman-continuum emission at very early times. We show that if recent claims of a numerous population of faint AGNs at z = 4-6 are upheld and the high inferred AGN comoving emissivity at these epochs persists to higher, z ≳ 10, redshifts, then active galaxies may drive the reionization of hydrogen and helium with little contribution from normal star-forming galaxies. We discuss an AGN-dominated scenario that satisfies a number of observational constraints: the H i photoionization rate is relatively flat over the range 2 < z < 5, hydrogen gets fully reionized by z ≃ 5.7, and the integrated Thomson scattering optical depth is τ ≃ 0.056, in agreement with measurements based on the Lyα opacity of the intergalactic medium (IGM) and cosmic microwave background polarization. It is a prediction of the model that helium gets doubly reionized before redshift 4, the heat input from helium reionization dominates the thermal balance of the IGM after hydrogen reionization, and z > 5 AGNs provide a significant fraction of the unresolved X-ray background at 2 keV. Singly and doubly ionized helium contribute about 13% to τ, and the He iii volume fraction is already 50% when hydrogen becomes fully reionized. 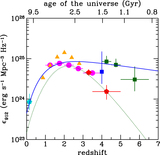