OGLE-2012-BLG-0563Lb: A Saturn-mass Planet around an M Dwarf with the Mass Constrained by Subaru AO Imaging

We report the discovery of a microlensing exoplanet OGLE-2012-BLG-0563Lb with the planet-star mass ratio of ˜ 1× {10}-3. Intensive photometric observations of a high-magnification microlensing event allow us to detect a clear signal of the planet. Although no parallax signal is detected in the light curve, we instead succeed at detecting the flux from the host star in high-resolution JHK‧-band images obtained by the Subaru/AO188 and Infrared Camera and Spectrograph instruments, allowing us to constrain the absolute physical parameters of the planetary system. With the help of spectroscopic information about the source star obtained during the high-magnification state by Bensby et al., we find that the lens system is located at 1.3{}-0.8+0.6 kpc from us, and consists of an M dwarf (0.34 {}-0.20+0.12M{}⊙ ) orbited by a Saturn-mass planet (0.39 {}-0.23+0.14MJup) at the projected separation of 0.74{}-0.42+0.26 AU (close model) or 4.3{}-2.5+1.5 AU (wide model). The probability of contamination in the host star’s flux, which would reduce the masses by a factor of up to three, is estimated to be 17%. This possibility can be tested by future high-resolution imaging. We also estimate the (J-{K}{{s}}) and (H-{K}{{s}}) colors of the host star, which are marginally consistent with a low metallicity mid-to-early M dwarf, although further observations are required for the metallicity to be conclusive. This is the fifth sub-Jupiter-mass (0.2\lt {m}{{p}}/{M}{Jup}\lt 1) microlensing planet around an M dwarf with the mass well constrained. The relatively rich harvest of sub-Jupiters around M dwarfs is contrasted with a possible paucity of ˜1-2 Jupiter-mass planets around the same type of star, which can be explained by the planetary formation process in the core-accretion scheme. 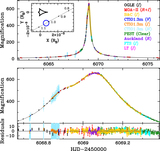