We have explored the impact of magnetic fields on the determination of the solar photospheric oxygen and iron abundances using three-dimensional radiation-magnetohydrodynamic (MHD) simulations of convection. Specifically, we examined differences in abundance deduced from three classes of atmospheres simulated with the MURaM code: a pure hydrodynamic (HD) simulation, an MHD simulation with a local dynamo magnetic field that has saturated with an unsigned vertical field strength of 80 G at τ = 1, and an MHD simulation with an initially imposed vertical mean field of 80 G. We use differential equivalent width analysis for diagnosing abundances derived from five oxygen and four iron lines of differing wavelength, oscillator strength, excitation potential, and Landé g-factor, and find that the morphology of the magnetic field is important to the outcome of abundance determinations. The largest deduced abundance differences are found in the vertical mean field simulations, where the O I and Fe I abundance corrections compared to the pure HD case are ~+0.011 dex and +0.065 dex respectively. Small scale unresolved field resulting from the local dynamo has a smaller impact on abundance determinations, with corrections of -0.0001 dex and +0.0044 dex in the magnetized compared to the pure HD simulations. While the overall influence of magnetic field on abundance estimates is found to be small, we stress that such estimates are sensitive not only to the magnitude of magnetic field but also to its morphology. 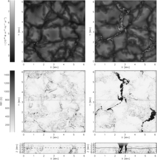