We present follow-up optical imaging and spectroscopy of one of the light echoes of η Carinae's nineteenth century Great Eruption discovered by Rest et al. By obtaining images and spectra at the same light echo position between 2011 and 2014, we follow the evolution of the Great Eruption on a 3 yr timescale. We find remarkable changes in the photometric and spectroscopic evolution of the echo light. The i-band light curve shows a decline of ~0.9 mag in ~1 yr after the peak observed in early 2011 and a flattening at later times. The spectra show a pure-absorption early G-type stellar spectrum at peak, but a few months after peak the lines of the Ca II triplet develop strong P-Cygni profiles and we see the appearance of [Ca II] 7291, 7324 doublet in emission. These emission features and their evolution in time resemble those observed in the spectra of some Type IIn supernovae and supernova impostors. Most surprisingly, starting ~300 days after peak brightness, the spectra show strong molecular transitions of CN at >~ 6800 Å. The appearance of these CN features can be explained if the ejecta are strongly nitrogen enhanced, as is observed in modern spectroscopic studies of the bipolar Homunculus nebula. Given the spectroscopic evolution of the light echo, velocities of the main features, and detection of strong CN, we are likely seeing ejecta that contributes directly to the Homunculus nebula. 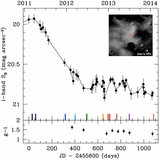