Recent Star Formation in the Leading Arm of the Magellanic Stream

Strongly interacting galaxies undergo a short-lived but dramatic phase of evolution characterized by enhanced star formation, tidal tails, bridges, and other morphological peculiarities. The nearest example of a pair of interacting galaxies is the Magellanic Clouds, whose dynamical interaction produced the gaseous features known as the Magellanic Stream trailing the pair's orbit about the Galaxy, the bridge between the Clouds, and the leading arm (LA), a wide and irregular feature leading the orbit. Young, newly formed stars in the bridge are known to exist, giving witness to the recent interaction between the Clouds. However, the interaction of the Clouds with the Milky Way (MW) is less well understood. In particular, the LA must have a tidal origin; however, no purely gravitational model is able to reproduce its morphology and kinematics. A hydrodynamical interaction with the gaseous hot halo and disk of the Galaxy is plausible as suggested by some models and supporting neutral hydrogen (H I) observations. Here we show for the first time that young, recently formed stars exist in the LA, indicating that the interaction between the Clouds and our Galaxy is strong enough to trigger star formation in certain regions of the LA—regions in the outskirts of the MW disk (R ~ 18 kpc), far away from the Clouds and the bridge. 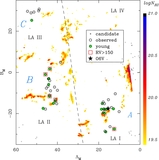