Gas physical conditions and kinematics of the giant outflow Ou4

Context. The recently discovered bipolar outflow Ou4 has a projected size of more than one degree in the plane of the sky. It is apparently centred on the young stellar cluster - whose most massive representative is the triple system HR 8119 - inside the H ii region Sh 2-129. The driving source, the nature, and the distance of Ou4 are not known.
Aims: The basic properties of Ou4 and its environment are investigated to shed light on the origin of this remarkable outflow.
Methods: Deep narrow-band imagery of the whole nebula at arcsecond resolution was obtained to study the details of its morphology. Long-slit spectroscopy of the bipolar lobe tips was secured to determine the gas ionisation mechanism, physical conditions, and line-of-sight velocities. An estimate of the proper motions at the tip of the south lobe using archival plate images was attempted. The existing multi-wavelength data for Sh 2-129 and HR 8119 were also comprehensively reviewed.
Results: The observed morphology of Ou4, its emission-line spatial distribution, line flux ratios, and the kinematic modelling developed adopting a bow-shock parabolic geometry, illustrate the expansion of a shock-excited fast collimated outflow. The observed radial velocities of Ou4 and its reddening are consistent with those of Sh 2-129 and HR 8119. The improved determination of the distance to HR 8119 (composed of two B0 V and one B0.5 V stars) and Sh 2-129 is 712 pc. We identify in WISE images at 22 μm an emission bubble of 5' radius (1 pc at the distance above) emitted by hot (107 K) dust grains, located inside the central part of Ou4 and corresponding to several [O iii] emission features of Ou4.
Conclusions: The apparent position of Ou4 and the properties studied in this work are consistent with the hypothesis that Ou4 is located inside the Sh 2-129 H ii region, suggesting that it was launched some 90 000 yr ago by HR 8119. The outflow total kinetic energy is estimated to be ≈4 × 1047 ergs. However, we cannot rule out the alternative possibility that Ou4 is a bipolar planetary nebula or the result of an eruptive event on a massive AGB or post-AGB star not yet identified.

Based on observations, obtained under Director's Discretionary Time of the Spanish Instituto de Astrofísica de Canarias, with the 2.5 m INT and the 4.2 m WHT operated on the island of La Palma by the Isaac Newton Group of Telescopes in the Spanish Observatorio of the Roque de Los Muchachos. 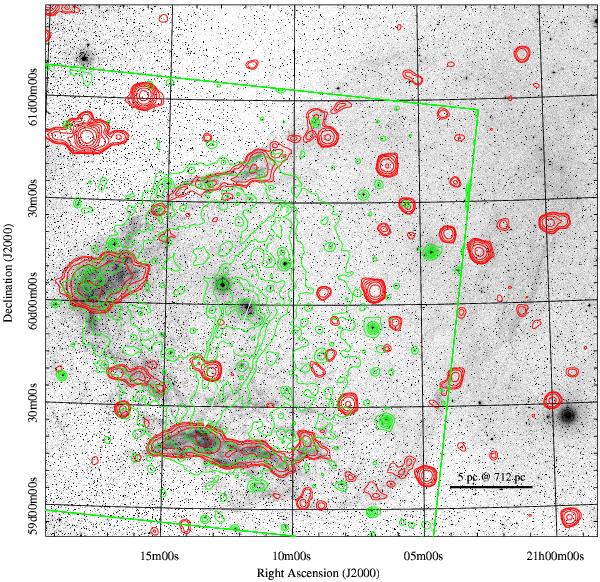