Aims: The rotation of meteoroids caused by gas drag during the ejection from a cometary nucleus has not been studied yet. The aim of this study is to estimate the rotational characteristics of meteoroids after their release from a comet during normal activity.
Methods: The basic dependence of spin rate on ejection velocity and meteoroid size is determined analytically. A sophisticated numerical model is then applied to meteoroids ejected from the 2P/Encke comet. The meteoroid shapes are approximated by polyhedrons, which have been determined by a 3D laser scanning method of 36 terrestrial rock samples. These samples come from three distinct sets with different origins and characteristics, such as surface roughness or angularity. Two types of gas-meteoroid interactions and three gas ejection models are assumed. The rotational characteristics of ejected meteoroid population are obtained by numerical integration of equations of motion with random initial conditions and random shape selection.
Results: It is proved that the results do not depend on a specific set of shape models and that they are applicable to the (unknown) shapes of real meteoroids. A simple relationship between the median of meteoroid spin frequencies bar{f} (Hz), ejection velocities vej (m s-1), and sizes D (m) is determined. For diffuse reflection of gas molecules from meteoroid's surface it reads as bar{f≃ 2× 10-3 v_ej D-0.88}, and for specular reflection of gas molecules from meteoroid's surface it is bar{f≃ 5× 10-3 v_ej D-0.88}. The distribution of spin frequencies is roughly normal on log scale, and it is relatively wide: a 2σ-interval can be described as (0.1, 10)× bar{f}. Most of the meteoroids are non-principal axis rotators. The median angle between angular momentum vector and spin vector is 12°. About 60% of meteoroids rotate in long-axis mode. The distribution of angular momentum vectors is not random. They are concentrated in the perpendicular direction with respect to the gas flow direction. These results have been determined for the 2P/Encke comet, but their validity is general. 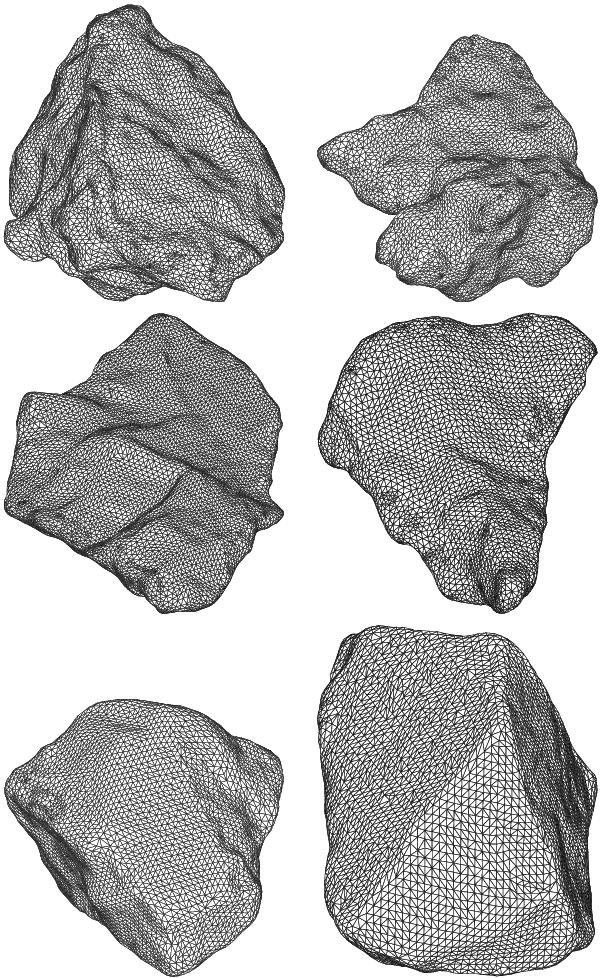