Context. Stellar activity and, in particular, convection-related surface structures, potentially cause bias in planet detection and characterisation. In the latter, interferometry can help disentangle the signal of the transiting planet.
Aims: We used realistic three-dimensional (3D) radiative hydrodynamical (RHD) simulations from the Stagger-grid and synthetic images computed with the radiative transfer code Optim3D to provide interferometric observables to extract the signature of stellar granulation and transiting planets.
Methods: We computed intensity maps from RHD simulations and produced synthetic stellar disk images as a nearby observer would see, thereby accounting for the centre-to-limb variations. We did this for twelve interferometric instruments covering wavelengths ranging from optical to infrared. We chose an arbitrary date and arbitrary star with coordinates, and this ensures observability throughout the night. This optimisation of observability allows for a broad coverage of spatial frequencies. The stellar surface asymmetries in the brightness distribution mostly affect closure phases, because of either convection-related structures or a faint companion. We then computed closure phases for all images and compared the system star with a transiting planet and the star alone. We considered the impact of magnetic spots with the construction of a hypothetical starspot image and compared the resulting closure phases with the system star that has a transiting planet.
Results: We analysed the impact of convection at different wavelengths. All the simulation depart from the axisymmetric case (closure phases not equal to 0 or ± π) at all wavelengths. The levels of asymmetry and inhomogeneity of stellar disk images reach high values with stronger effects from the 3rd visibility lobe on. We present two possible targets (Beta Com and Procyon) either in the visible or in the infrared and find that departures up to 16° can be detected on the 3rd lobe and higher. In particular, MIRC is the most appropriate instrument because it combines good UV coverage and long baselines. Moreover, we explored the impact of convection on interferometric planet signature for three prototypes of planets with sizes corresponding to one hot Jupiter, one hot Neptune, and a terrestrial planet. The signature of the transiting planet in the closure phase is mixed with the signal due to the convection-related surface structures, but it is possible to disentangle it at particular wavelengths (either in the infrared or in the optical) by comparing the closure phases of the star at difference phases of the planetary transit. It must be noted that starspots caused by the magnetic field may pollute the granulation and the transiting planet signals. However, it is possible to differentiate the transiting planet signal because the time scale of a planet crossing the stellar disk is much smaller than the typical rotational modulation of a star.
Conclusions: Detection and characterisation of planets must be based on a comprehensive knowledge of the host star, and this includes the detailed study of the stellar surface convection with interferometric techniques. In this context, RHD simulations are crucial for this aim. We emphasise that interferometric observations should be pushed at high spatial frequencies by accumulating observations on closure phases at short and long baselines. 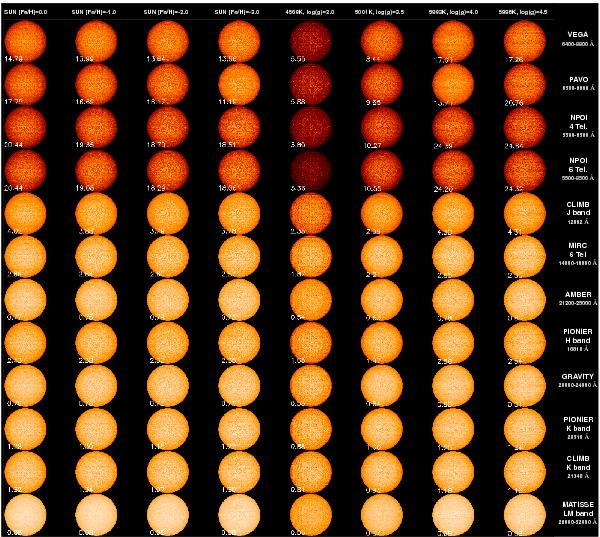