Context. Several fast radio bursts have been discovered recently, showing a bright, highly dispersed millisecond radio pulse. The pulses do not repeat and are not associated with a known pulsar or gamma-ray burst. The high dispersion suggests sources at cosmological distances, hence implying an extremely high radio luminosity, far larger than the power of single pulses from a pulsar.
Aims: We suggest that a fast radio burst represents the final signal of a supramassive rotating neutron star that collapses to a black hole due to magnetic braking. The neutron star is initially above the critical mass for non-rotating models and is supported by rapid rotation. As magnetic braking constantly reduces the spin, the neutron star will suddenly collapse to a black hole several thousand to million years after its birth.
Methods: We discuss several formation scenarios for supramassive neutron stars and estimate the possible observational signatures making use of the results of recent numerical general-relativistic calculations.
Results: While the collapse will hide the stellar surface behind an event horizon, the magnetic-field lines will snap violently. This can turn an almost ordinary pulsar into a bright radio "blitzar": accelerated electrons from the travelling magnetic shock dissipate a significant fraction of the magnetosphere and produce a massive radio burst that is observable out to z > 0.7. Only a few per cent of the neutron stars need to be supramassive in order to explain the observed rate.
Conclusions: We suggest the intriguing possibility that fast radio bursts might trace the solitary and almost silent formation of stellar mass black holes at high redshifts. These bursts could be an electromagnetic complement to gravitational-wave emission and reveal a new formation and evolutionary channel for black holes and neutron stars that are not seen as gamma-ray bursts. If supramassive neutron stars are formed at birth and not by accretion, radio observations of these bursts could trace the core-collapse supernova rate throughout the universe. 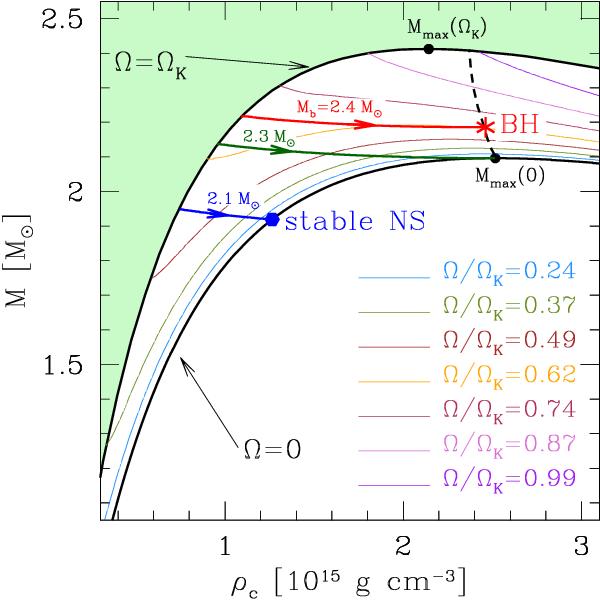