Context. At young ages, low surface gravity affects the atmospheric properties of ultracool dwarfs. The impact on medium-resolution near-infrared (NIR) spectra has only been slightly investigated at the M-L transition so far.
Aims: We present a library of NIR (1.1-2.45 μm) medium-resolution (R ~ 1500-2000) integral field spectra of 15 young M6-L0 dwarfs. We aim at deriving updated NIR spectral type, luminosity, and physical parameters (Teff, log g, M, L/L⊙) for each source. This work also aims at testing the latest generation of BT-SETTL atmospheric models.
Methods: We estimated spectral types using spectral indices and the spectra of young objects classified in the optical. We used the 2010 and 2012 releases of the BT-SETTL synthetic spectral grid and cross-checked the results with the DRIFT-PHOENIX models to derive the atmospheric properties of the sources.
Results: We do not find significant differences between the spectra of young companions and those of young isolated brown dwarfs in the same spectral type range. We derive infrared spectral types L0 ± 1, L0 ± 1, M9.5 ± 0.5, M9.5 ± 0.5, M9.25 ± 0.25, M8+0.5-0.75, and M8.5 ± 0.5 for AB Pic b, Cha J110913-773444, USco CTIO 108B, GSC 08047-00232 B, DH Tau B, CT Cha b, and HR7329B, respectively. The BT-SETTL and DRIFT-PHOENIX models yield close Teff and log g estimates for each source. The models seem to show a 600+600-300 K drop in the effective temperature at the M-L transition. Assuming the former temperatures are correct, we then derive new mass estimates that confirm that DH Tau B, USco CTIO 108B, AB Pic b, KPNO Tau 4, OTS 44, and Cha1109 lie inside or at the boundary of the planetary mass range. We combine the empirical luminosities of the M9.5-L0 sources to the Teff to derive semi-empirical radii estimates that do not match "hot-start" evolutionary models predictions at 1-3 Myr. We use complementary data to demonstrate that atmospheric models are able to reproduce the combined optical and infrared spectral energy distribution, together with the NIR spectra of these sources simultaneously. But the models still fail to represent the dominant features in the optical. This issue raises doubts on the ability of these models to predict effective temperatures from NIR spectra alone.
Conclusions: The library provides templates for characterizing other young and late type objects. The study advocates the use of photometric and spectroscopic information over a broad range of wavelengths to study the properties of very low-mass young companions to be detected with the planet imagers (Subaru/SCExAO, LBT/LMIRCam, Gemini/GPI, VLT/SPHERE). 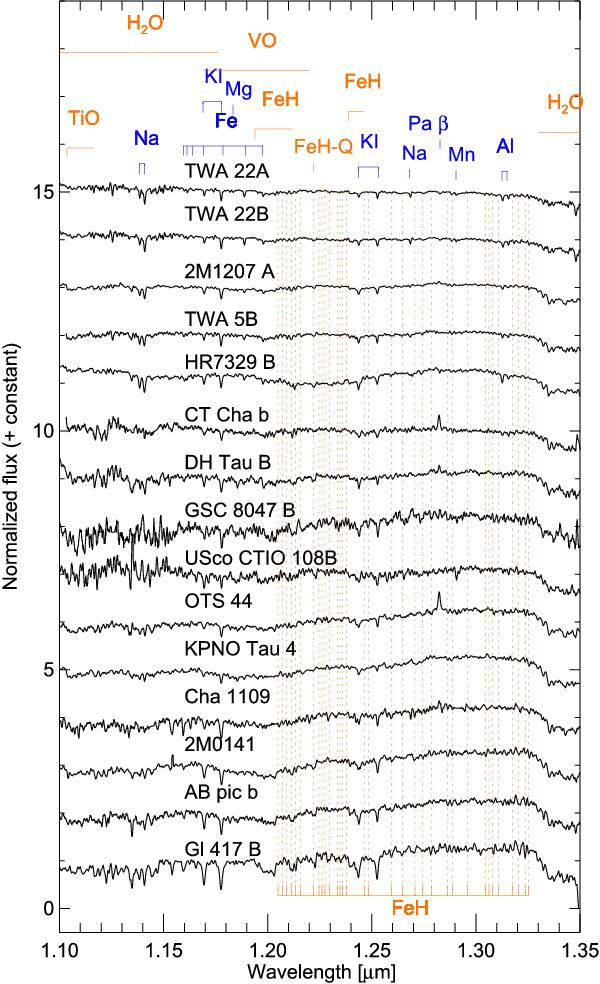