Hercules X-1: variations of the cyclotron line energy with flux, with phase and with time

Her X-1 is one of the the most intensively studied Accreting X-ray Binary Pulsars (AXBPs). This is largely because it is a bright and persistent X-ray pulsar, showing the largest variety of observable phenomena, partly due to the favorable geometry in observing the binary nearly edge-on. Her X-1 is the binary X-ray pulsar in which the first cyclotron line (or Cyclotron Resonant Scattering Feature - CRSF) was detected in 1975. Since then, we have made an effort to observe the source and the CRSF around 40 keV as often as possible, using those X-ray satellites which cover the high energy X-ray range. Extended contributions are from the Rossi X-ray Timing Explorer (RXTE), {INTEGRAL, Suzaku and Swift. The most recent contribution with a new degree of quality is from the high energy imaging telescope on NuStar. We have found that the CRSF is variable with flux, with phase (both pulsational and precessional phase) and with time. The historical evolution of the pulse phase averaged CRSF centroid energy Ecyc since its discovery is characterized by an initial value around 35 keV, an abrupt jump upwards to beyond ~40$ keV between 1990 and 1994 and an apparent secular decay thereafter. Much of this decay, however, was found to be due to an artifact, namely a correlation between Ecyc and the X-ray luminosity Lx discovered in 2007, amounting to a change of ~7% in energy for a factor of two in luminosity. In observations since 2007, however, we now find a statistically significant trend of a true secular decrease of the cyclotron line energy. In addition, we discuss recent results of pulse phase spectroscopy and evidence for the suspected variation in Ecyc with phase of the 35 d precessional period (which is observed both in the modulation of the X-ray flux and in the systematic variation in shape of the 1.24 s pulse profile. 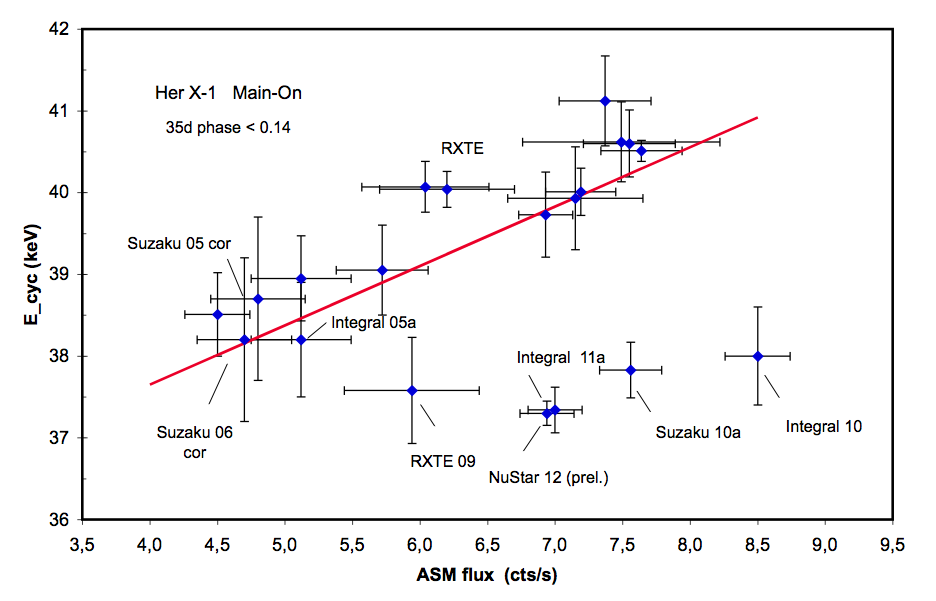