We substantially update the capabilities of the open source software package Modules for Experiments in Stellar Astrophysics (MESA), and its one-dimensional stellar evolution module, MESA star. Improvements in MESA star's ability to model the evolution of giant planets now extends its applicability down to masses as low as one-tenth that of Jupiter. The dramatic improvement in asteroseismology enabled by the space-based Kepler and CoRoT missions motivates our full coupling of the ADIPLS adiabatic pulsation code with MESA star. This also motivates a numerical recasting of the Ledoux criterion that is more easily implemented when many nuclei are present at non-negligible abundances. This impacts the way in which MESA star calculates semi-convective and thermohaline mixing. We exhibit the evolution of 3-8 M ⊙ stars through the end of core He burning, the onset of He thermal pulses, and arrival on the white dwarf cooling sequence. We implement diffusion of angular momentum and chemical abundances that enable calculations of rotating-star models, which we compare thoroughly with earlier work. We introduce a new treatment of radiation-dominated envelopes that allows the uninterrupted evolution of massive stars to core collapse. This enables the generation of new sets of supernovae, long gamma-ray burst, and pair-instability progenitor models. We substantially modify the way in which MESA star solves the fully coupled stellar structure and composition equations, and we show how this has improved the scaling of MESA's calculational speed on multi-core processors. Updates to the modules for equation of state, opacity, nuclear reaction rates, and atmospheric boundary conditions are also provided. We describe the MESA Software Development Kit that packages all the required components needed to form a unified, maintained, and well-validated build environment for MESA. We also highlight a few tools developed by the community for rapid visualization of MESA star results. 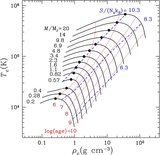