We present simulations of the magnetized interstellar medium (ISM) in models of massive star-forming (40 M ☉ yr-1) disk galaxies with high gas surface densities (Σgas ~ 100 M ☉ pc-2) similar to observed star-forming high-redshift disks. We assume that type II supernovae deposit 10% of their energy into the ISM as cosmic rays (CRs) and neglect the additional deposition of thermal energy or momentum. With a typical Galactic diffusion coefficient for CRs (3 × 1028 cm2 s-1), we demonstrate that this process alone can trigger the local formation of a strong low-density galactic wind maintaining vertically open field lines. Driven by the additional pressure gradient of the relativistic fluid, the wind speed can exceed 103 km s-1, much higher than the escape velocity of the galaxy. The global mass loading, i.e., the ratio of the gas mass leaving the galactic disk in a wind to the star formation rate, becomes of order unity once the system has settled into an equilibrium. We conclude that relativistic particles accelerated in supernova remnants alone provide a natural and efficient mechanism to trigger winds similar to observed mass-loaded galactic winds in high-redshift galaxies. These winds also help in explaining the low efficiencies for the conversion of gas into stars in galaxies, as well as the early enrichment of the intergalactic medium with metals. This mechanism may be at least of similar importance to the traditionally considered momentum feedback from massive stars and thermal and kinetic feedback from supernova explosions. 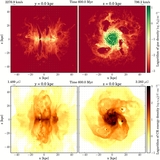