Evidence for the Tidal Destruction of Hot Jupiters by Subgiant Stars

Tidal transfer of angular momentum is expected to cause hot Jupiters to spiral into their host stars. Although the timescale for orbital decay is very uncertain, it should be faster for systems with larger and more evolved stars. Indeed, it is well established that hot Jupiters are found less frequently around subgiant stars than around main-sequence stars. However, the interpretation of this finding has been ambiguous, because the subgiants are also thought to be more massive than the F- and G-type stars that dominate the main-sequence sample. Consequently, it has been unclear whether the absence of hot Jupiters is due to tidal destruction or inhibited formation of those planets around massive stars. Here we show that the Galactic space motions of the planet-hosting subgiant stars demand that on average they be similar in mass to the planet-hosting main-sequence F- and G-type stars. Therefore the two samples are likely to differ only in age, and provide a glimpse of the same exoplanet population both before and after tidal evolution. As a result, the lack of hot Jupiters orbiting subgiants is clear evidence for their tidal destruction. Questions remain, though, about the interpretation of other reported differences between the planet populations around subgiants and main-sequence stars, such as their period and eccentricity distributions and overall occurrence rates. 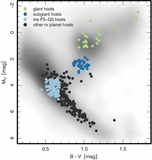