The Future of the Sun: An Evolved Solar Twin Revealed by CoRoT

The question of whether the Sun is peculiar within the class of solar-type stars has been the subject of active investigation over the past three decades. Although several solar twins have been found with stellar parameters similar to those of the Sun (albeit in a range of Li abundances and with somewhat different compositions), their rotation periods are unknown, except for 18 Sco, which is younger than the Sun and with a rotation period shorter than solar. It is difficult to obtain rotation periods for stars of solar age from ground-based observations, as a low-activity level implies a shallow rotational modulation of their light curves. CoRoT has provided space-based long time series from which the rotation periods of solar twins as old as the Sun could be estimated. Based on high-signal-to-noise, high-resolution spectroscopic observations gathered at the Subaru Telescope, we show that the star CoRoT ID 102684698 is a somewhat evolved solar twin with a low Li abundance. Its rotation period is 29 ± 5 days, compatible with its age (6.7 Gyr) and low lithium content, A Li <~ 0.85 dex. Interestingly, our CoRoT solar twin seems to have enhanced abundances of the refractory elements with respect to the Sun, a typical characteristic of most nearby twins. With a magnitude V ~= 14.1, ID 102684698 is the first solar twin revealed by CoRoT, the farthest field solar twin so far known, and the only solar twin older than the Sun for which a rotation period has been determined. 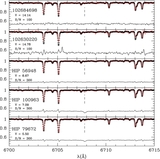