Interacting Supernovae and Supernova Impostors: SN 2009ip, is this the End?

We report the results of a three-year-long dedicated monitoring campaign of a restless luminous blue variable (LBV) in NGC 7259. The object, named SN 2009ip, was observed photometrically and spectroscopically in the optical and near-infrared domains. We monitored a number of erupting episodes in the past few years, and increased the density of our observations during eruptive episodes. In this paper, we present the full historical data set from 2009 to 2012 with multi-wavelength dense coverage of the two high-luminosity events between 2012 August and September. We construct bolometric light curves and measure the total luminosities of these eruptive or explosive events. We label them the 2012a event (lasting ~50 days) with a peak of 3 × 1041 erg s-1, and the 2012b event (14 day rise time, still ongoing) with a peak of 8 × 1042 erg s-1. The latter event reached an absolute R-band magnitude of about -18, comparable to that of a core-collapse supernova (SN). Our historical monitoring has detected high-velocity spectral features (~13,000 km s-1) in 2011 September, one year before the current SN-like event. This implies that the detection of such high-velocity outflows cannot, conclusively, point to a core-collapse SN origin. We suggest that the initial peak in the 2012a event was unlikely to be due to a faint core-collapse SN. We propose that the high intrinsic luminosity of the latest peak, the variability history of SN 2009ip, and the detection of broad spectral lines indicative of high-velocity ejecta are consistent with a pulsational pair-instability event, and that the star may have survived the last outburst. The question of the survival of the LBV progenitor star and its future fate remain open issues, only to be answered with future monitoring of this historically unique explosion. 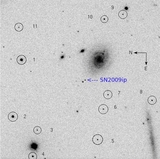