We present a catalog of galaxy cluster candidates, selected through their Sunyaev-Zel'dovich (SZ) effect signature in the first 720 deg2 of the South Pole Telescope (SPT) survey. This area was mapped with the SPT in the 2008 and 2009 austral winters to a depth of ~18 μKCMB-arcmin at 150 GHz 550 deg2 of it was also mapped to ~44 μKCMB-arcmin at 95 GHz. Based on optical imaging of all 224 candidates and near-infrared imaging of the majority of candidates, we have found optical and/or infrared counterparts for 158, which we then classify as confirmed galaxy clusters. Of these 158 clusters, 135 were first identified as clusters in SPT data, including 117 new discoveries reported in this work. This catalog triples the number of confirmed galaxy clusters discovered through the SZ effect. We report photometrically derived (and in some cases spectroscopic) redshifts for confirmed clusters and redshift lower limits for the remaining candidates. The catalog extends to high redshift with a median redshift of z = 0.55 and maximum confirmed redshift of z = 1.37. Forty-five of the clusters have counterparts in the ROSAT bright or faint source catalogs from which we estimate X-ray fluxes. Based on simulations, we expect the catalog to be nearly 100% complete above M 500 ≈ 5 × 1014 M ⊙ h -1 70 at z >~ 0.6. There are 121 candidates detected at signal-to-noise ratio greater than five, at which the catalog purity is measured to be 95%. From this high-purity subsample, we exclude the z < 0.3 clusters and use the remaining 100 candidates to improve cosmological constraints following the method presented by Benson et al. Adding the cluster data to CMB + BAO + H 0 data leads to a preference for non-zero neutrino masses while only slightly reducing the upper limit on the sum of neutrino masses to ∑m ν < 0.38 eV (95% CL). For a spatially flat wCDM cosmological model, the addition of this catalog to the CMB + BAO + H 0 + SNe results yields σ8 = 0.807 ± 0.027 and w = -1.010 ± 0.058, improving the constraints on these parameters by a factor of 1.4 and 1.3, respectively. The larger cluster catalog presented in this work leads to slight improvements in cosmological constraints from those presented by Benson et al. These cosmological constraints are currently limited by uncertainty in the cluster mass calibration, not the size or quality of the cluster catalog. A multi-wavelength observation program to improve the cluster mass calibration will make it possible to realize the full potential of the final 2500 deg2 SPT cluster catalog to constrain cosmology. 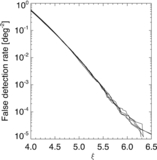