The age structure of stellar populations in the solar vicinity. Clues of a two-phase formation history of the Milky Way disk

We analyze a sample of solar neighborhood stars that have high-quality abundance determinations and show that there are two distinct regimes of [α/Fe] versus age, which we identify as the epochs of the thick and thin disk formation. A tight correlation between metallicity and [α/Fe] versus age is clearly identifiable for thick disk stars, implying that this population formed from a well mixed interstellar medium, probably initially in starburst and then more quiescently, over a time scale of 4-5 Gyr. Thick disk stars have vertical velocity dispersions which correlate with age, with the youngest objects of this population having small scale heights similar to those of thin disk stars. A natural consequence of these two results is that a vertical metallicity gradient is expected in this population. We suggest that the youngest thick disk set the initial conditions from which the inner thin disk started to form about 8 Gyr ago, at [Fe/H] in the range of (-0.1, +0.1) dex and [α/Fe] ~ 0.1 dex. This also provides an explanation for the apparent coincidence between the existence of a step in metallicity at 7-10 kpc in the thin disk and the confinement of the thick disk within R < 10 kpc. We suggest that the outer thin disk developed outside the influence of the thick disk, giving rise to a separate structure, but also that the high alpha-enrichment of those regions may originate from a primordial pollution of the outer regions by the gas expelled from the forming thick disk. Metal-poor thin disk stars ([Fe/H] < -0.4 dex) in the solar vicinity, whose properties are best explained by them originating in the outer disk, are shown to be as old as the youngest thick disk (9-10 Gyr). This implies that the outer thin disk started to form while the thick disk was still forming stars in the inner parts of the Galaxy. Hence, while the overall inner (thick+thin) disk is comprised of two structures with different scale lengths and whose combination may give the impression of an inside-out formation process, the thin disk itself probably formed its first stars in its outskirts. Moreover, we point out that, given the tight age-metallicity and age-[α/Fe] relations that exist in the thick disk, an inside-out process would give rise to a radial gradient in metallicity and α-elements in this population, which is not observed. Finally, we argue that our results leave little room for radial migration (in the sense of churning) either to have contaminated the solar vicinity, or, on a larger scale, to have redistributed stars in significant proportion across the solar annulus. 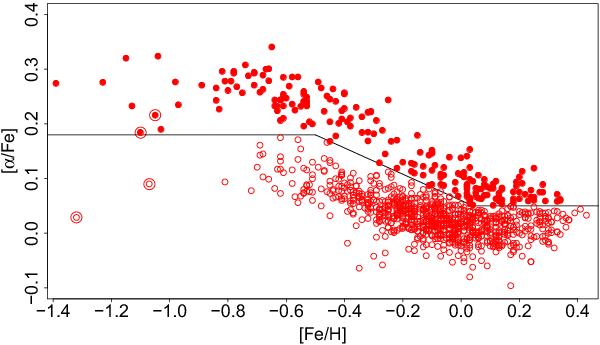