Context. The first two of a total of six nano-satellites that will constitute the BRITE-Constellation space photometry mission have recently been launched successfully.
Aims: In preparation for this project, we carried out time-resolved colour photometry in a field that is an excellent candidate for BRITE measurements from space.
Methods: We acquired 117 h of Strömgren uvy data during 19 nights. Our targets comprised the β Cephei stars κ and λ Sco, the eclipsing binary μ1 Sco, and the variable super/hypergiant ζ1 Sco.
Results: For κ Sco, a photometric mode identification in combination with results from the spectroscopic literature suggests a dominant (l,m) = (1, -1) β Cephei-type pulsation mode of the primary star. The longer period of the star may be a rotational variation or a g-mode pulsation. For λ Sco, we recover the known dominant β Cephei pulsation, a longer-period variation, and observed part of an eclipse. Lack of ultraviolet data precludes mode identification for this star. We noticed that the spectroscopic orbital ephemeris of the closer pair in this triple system is inconsistent with eclipse timings and propose a refined value for the orbital period of the closer pair of 5.95189 ± 0.00003 d. We also argue that the components of the λ Sco system are some 30% more massive than previously thought. The binary light curve solution of μ1 Sco requires inclusion of the irradiation effect to explain the u light curve, and the system could show additional low amplitude variations on top of the orbital light changes. ζ1 Sco shows long-term variability on a time scale of at least two weeks that we prefer to interpret in terms of a variable wind or strange mode pulsations. 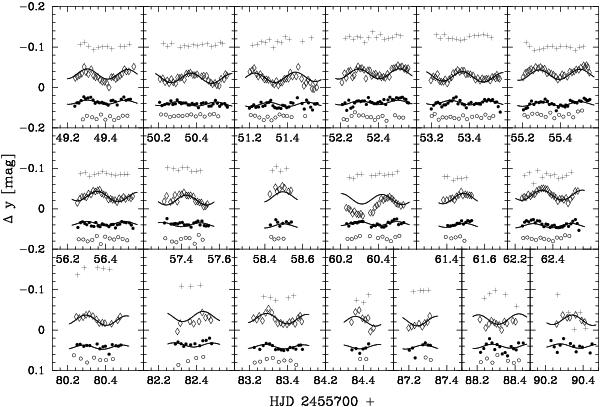