Context. We present a study of the sulfur-bearing species detected in a line confusion-limited survey towards Orion KL performed with the IRAM 30-m telescope in the frequency range 80-281 GHz.
Aims: This study is part of an analysis of the line survey divided into families of molecules. Our aim is to derive accurate physical conditions, as well as molecular abundances, in the different components of Orion KL from observed SO and SO2 lines.
Methods: As a starting point, we assumed local thermodynamic equilibrium (LTE) conditions obtain rotational temperatures. We then used a radiative transfer model, assuming either LVG or LTE excitation to derive column densities of these molecules in the different components of Orion KL.
Results: We have detected 68 lines of SO, 34SO, 33SO, and S18O and 653 lines of SO2, 34SO2, 33SO2, SO18O, and SO2ν2 = 1. We provide column densities for all of them and also upper limits for the column densities of S17O, 36SO, 34S18O, SO17O, and 34SO2ν2 = 1 and for several undetected sulfur-bearing species. In addition, we present 2' × 2' maps around Orion IRc2 of SO2 transitions with energies from 19 to 131 K and also maps with four transitions of SO, 34SO, and 34SO2. We observe an elongation of the gas along the NE-SW direction. An unexpected emission peak appears at 20.5 km s-1 in most lines of SO and SO2. A study of the spatial distribution of this emission feature shows that it is a new component of a few arcseconds (~5″) in diameter, which lies ~4″ west of IRc2. We suggest the emission from this feature is related to shocks associated to the BN object.
Conclusions: The highest column densities for SO and SO2 are found in the high-velocity plateau (a region dominated by shocks) and in the hot core. These values are up to three orders of magnitude higher than the results for the ridge components. We also find high column densities for their isotopologues in both components. Therefore, we conclude that SO and SO2 are good tracers, not only of regions affected by shocks, but also of regions with warm dense gas (hot cores). 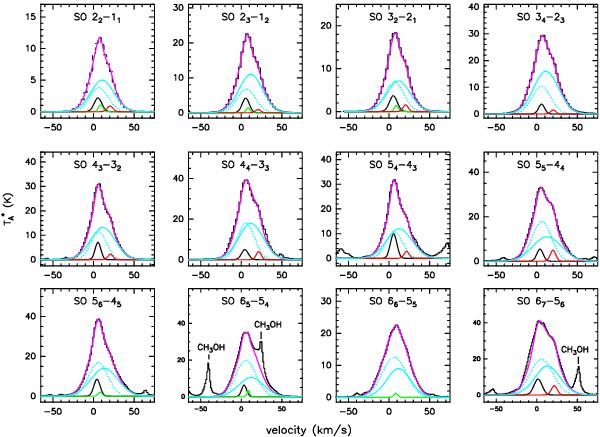