An interferometric study of the Fomalhaut inner debris disk. III. Detailed models of the exozodiacal disk and its origin

Context. Debris disks are thought to be extrasolar analogs to the solar system planetesimal belts. The star Fomalhaut harbors a cold debris belt at 140 AU comparable to the Edgeworth-Kuiper belt, as well as evidence of a warm dust component, unresolved by single-dish telescopes, which is suspected of being a bright analog to the solar system's zodiacal dust.
Aims: Interferometric observations obtained with the VLTI/VINCI instrument and the Keck Interferometer Nuller have identified near- and mid-infrared excesses attributed respectively to hot and warm exozodiacal dust residing in the inner few AU of the Fomalhaut environment. We aim to characterize the properties of this double inner dust belt and to unveil its origin.
Methods: We performed parametric modeling of the exozodiacal disk ("exozodi") using the GRaTeR radiative transfer code to reproduce the interferometric data, complemented by mid- to far-infrared photometric measurements from Spitzer and Herschel. A detailed treatment of sublimation temperatures was introduced to explore the hot population at the size-dependent sublimation rim. We then used an analytical approach to successively testing several source mechanisms for the dust and suspected parent bodies.
Results: A good fit to the multiwavelength data is found by two distinct dust populations: (1) a population of very small (0.01 to 0.5 μm), hence unbound, hot dust grains confined in a narrow region (~0.1-0.3 AU) at the sublimation rim of carbonaceous material; (2) a population of bound grains at ~2 AU that is protected from sublimation and has a higher mass despite its fainter flux level. We propose that the hot dust is produced by the release of small carbon grains following the disruption of dust aggregates that originate in the warm component. A mechanism, such as gas braking, is required to further confine the small grains for a long enough time. In situ dust production could hardly be ensured for the age of the star, so we conclude that the observed amount of dust is triggered by intense dynamical activity.
Conclusions: Fomalhaut may be representative of exozodis that are currently being surveyed at near and mid-infrared wavelengths worldwide. We propose a framework for reconciling the "hot exozodi phenomenon" with theoretical constraints: the hot component of Fomalhaut is likely the "tip of the iceberg" since it could originate in the more massive, but fainter, warm dust component residing near the ice line. This inner disk exhibits interesting morphology and can be considered a prime target for future exoplanet research. 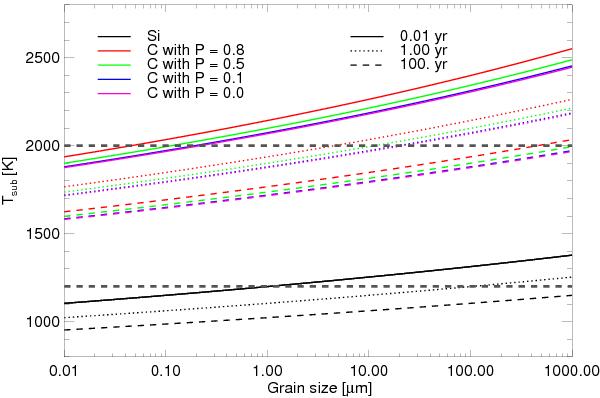