Aims: We analyzed chemical and kinematical properties of about 850 FGK solar neighborhood long-lived dwarfs observed with the HARPS high-resolution spectrograph. The stars in the sample have log g ≥ 4 dex, 5000 ≤ Teff ≤ 6500 K, and - 1.39 ≤ [Fe/H] ≤ 0.55 dex. The aim of this study is to characterize and explore the kinematics and chemical properties of stellar populations of the Galaxy in order to understand their origins and evolution.
Methods: We applied a purely chemical analysis approach based on the [α/Fe] vs. [Fe/H] plot to separate Galactic stellar populations into the thin disk, thick disk, and high-α metal-rich (hαmr). Then, we explored the population's stellar orbital eccentricity distributions, their correlation with metallicity, and rotational velocity gradients with metallicity in the Galactic disks to provide constraints on the various formation models.
Results: We identified a gap in the [α/Fe]-[Fe/H] plane for the α-enhanced stars, and by performing a bootstrapped Monte Carlo test we obtained a probability higher than 99.99% that this gap is not due to small-number statistics. Our analysis shows a negative gradient of the rotational velocity of the thin disk stars with [Fe/H] (-17 km s-1 dex-1), and a steep positive gradient for both the thick disk and hαmr stars with the same magnitude of about +42 km s-1 dex-1. For the thin disk stars we observed no correlation between orbital eccentricities and metallicity, but observed a steep negative gradient for the thick disk and hαmr stars with practically the same magnitude (≈-0.18 dex-1). The correlations observed for the nearby stars (on average 45 pc) using high-precision data, in general agree well with the results obtained for the SDSS sample of stars located farther from the Galactic plane.
Conclusions: Our results suggest that radial migration played an important role in the formation and evolution of the thin disk. For the thick disk stars it is not possible to reach a firm conclusion about their origin. Based on the eccentricity distribution of the thick disk stars only their accretion origin can be ruled out, and the heating and migration scenario could explain the positive steep gradient of Vφ with [Fe/H]. When we analyzed the hαmr stellar population we found that they share properties of both the thin and thick disk population. A comparison of the properties of the hαmr stars with those of the subsample of stars from the N-body/SPH simulation using radial migration suggest that they may have originated from the inner Galaxy. Further detailed investigations would help to clarify their exact nature and origin. 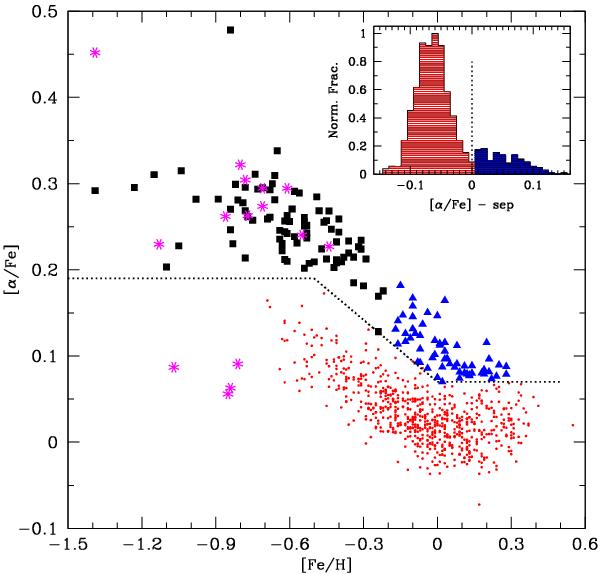